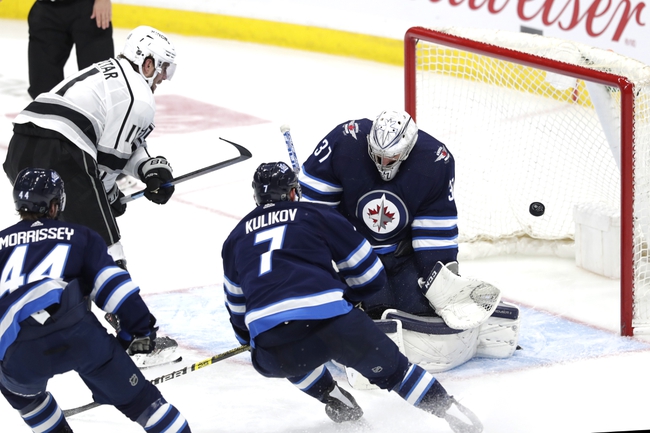 The Winnipeg Jets and the Los Angeles Kings meet in NHL action from Staples Center on Saturday night.

The Winnipeg Jets will look to build on their current three game winning streak after a 3-0 win over the Anaheim Ducks in their last outing. The game was scoreless through the opening 20 minutes before Neal Pionk got the Jets on the board 1:08 into the 2nd period. Nikolaj Ehlers doubled the lead just before the midway point of the 2nd period and the Jets would carry that lead into the 3rd where Kyle Connor made it 3-0 less than two minutes into the 3rd period. Connor Hellebuyck picked up the win, improving to 13-7-1 on the year after stopping all 24 shots faced in the winning effort for his 2nd shutout of the season.

The Los Angeles Kings will look to bounce back from a 4-1 loss to the San Jose Sharks in their last outing. San Jose jumped out to a 2-0 lead by the end of the 1st period and 4-0 by the end of the 2nd before Kyle Clifford got the Kings on the board with a consolation goal with 1:49 to play in the 3rd period. Jeff Carter led the Kings with 6 shots on goal while Michael Amadio had 5 shots on target and Tyler Toffoli added 4. Jonathan Quick ended up with the loss, falling to 7-10-1 on the year after allowing 4 goals on 22 shots faced in the losing effort.

The Kings could be worth a look as a home dog, given that they’ve won 6 of their last 8 at home and are a much better team at home than on the road. However, as good as the Kings are at home, the Jets have been even better on the road, going 10-4 as well as winning 7 of their last 8 games. Side by side, the Jets are just the easier team to trust with consistency, so I’ll side with the Jets on the road in this spot.