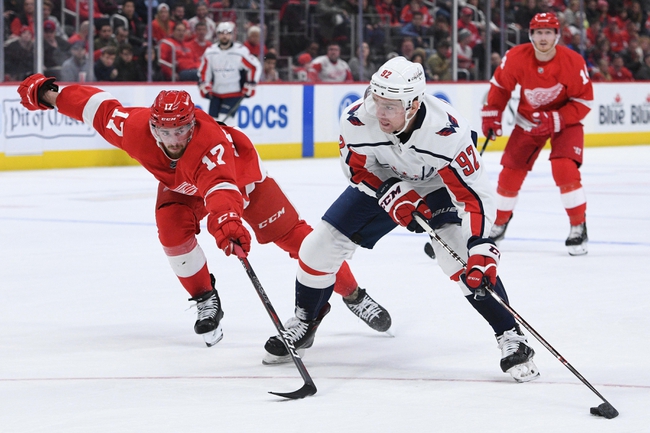 Where to Watch: FS-Detroit, NBCS-Washington Stream live sports and exclusive originals on ESPN+. Sign up now!

The Washington Capitals and the Detroit Red Wings meet in NHL action from the Little Caesars Arena on Saturday night.

The Washington Capitals will look to build on a hard-fought 4-3 overtime win over Tampa Bay in their last outing. Tampa Bay opened the scoring with the lone goal of the opening period before doubling the lead early in the 2nd. Evgeny Kuznetsov pulled a goal back just :49 after Tampa Bay made it 2-0 but the Bolts restored the two goal lead before the end of the 2nd period. Jakub Vrana made it 3-2 early in the 3rd before Alex Ovechkin scored a power play goal to tie the game at three. The rest of the 3rd wouldn’t produce a winner, so it was off to OT where Dmitry Orlov buried the winner to give the Caps the win and the extra point. Braden Holtby got the win to improve to 13-2-4 after stopping 27 of 30 shots faced in the winning effort.

The Detroit Red Wings will hope to snap an eight-game losing streak after a 6-1 loss to Philadelphia last time out. Philadelphia opened the scoring just 2:56 into the game and Robby Fabbri would tie the game at one just over eight minutes into the opening period. We didn’t know it then, but that’s when the wheels would fall off as Philly added one more in the 1st, one in the 2nd and three unanswered goals in the 3rd for the final 6-1 score line. Calvin Pickard took the loss in his Red Wings debut after giving up 6 goals on 35 shots faced in defeat.

The only case you could make for Detroit is that the Tampa Bay was a battle and maybe Detroit could catch Washington sleeping, but I don’t think that happens here. You have one of the best teams in the league going up against the worst and it’s not close. I’ll side with Washington on the puck line on the road as I think the Caps win this one easily.