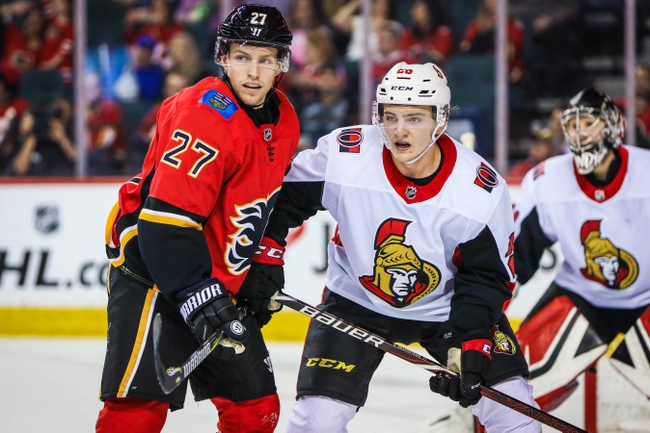 Where to watch: City, SN360 Stream live sports and exclusive originals on ESPN+. Sign up now!

The Ottawa Senators will look to rebound after a 7-2 loss to Minnesota in their last outing. Nick Paul opened the scoring for the Sens with the lone goal of the opening period and that lead held until just before the midway point of the 2nd where Minnesota tied the game at one. The lead lasted just :54 before Brady Tkachuk tied the game at one. Minnesota scored a pair of goals 2:51 apart to surge ahead 3-2 heading into the 3rd where the Wild scored four more unanswered goals in a span of 7:04 to secure the win. Anders Nilsson took the loss, falling to 7-6-1 on the year after allowing all 7 goals on 35 shots faced in defeat.

The Calgary Flames will look to  build on a 3-2 win over Buffalo in their last outing. T.J. Brodie opened the scoring for the Flames with the lone goal of the opening frame before Buffalo tied it up with the only goal in the 2nd period. Buffalo took a 2-1 lead 1:55 into the 3rd but Matthew Tkachuk would tie the game for Calgary just 2:07 later. The rest of the 3rd wouldn’t produce a winner, so it was off to OT where Elias Lindholm buried the winner for the Flames. David Rittich got the win to improve to 11-7-4 after stopping 34 of 36 shots faced in the victory.

I’d like to take a shot with Ottawa and the plus money, but the fact is that the Senators continue to stink up the joint on the road and going from a blowout loss in Minnesota to facing a Calgary team that’s normally pretty good at home won’t make things any better. I think the Flames are prepared to move past this whole drama with their now ex-head coach and I look for them to start the Geoff Ward era on a high-note, so I’ll side with the Flames on the puck line here to break down the juice.