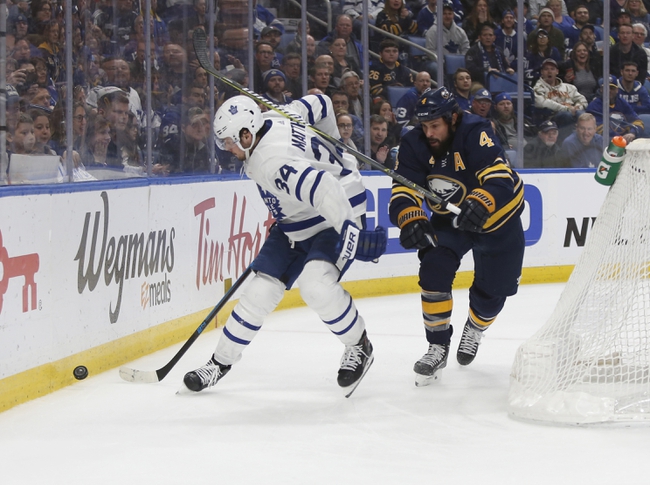 Where to watch: TSN4, MSG-Buffalo Stream live sports and exclusive originals on ESPN+. Sign up now!

The Toronto Maple Leafs and the Buffalo Sabres meet in an Atlantic division matchup from Keybank Arena on Friday night.

The Toronto Maple Leafs will look to build on their 3rd straight win coming in the form of a 6-0 thrashing of Detroit last time out. Travis Dermott and Tyson Barrie scored 1:20 apart to give Toronto a quick 2-0 lead before John Tavares made it 3-0 just before the midway point of the 1st period. William Nylander pushed Toronto ahead 4-0 just 1:03 into the 2nd and Andreas Johnsson scored a pair 3:33 apart to give Toronto an insurmountable 6-0 lead that they’re ride through the 2nd and through the 3rd to the finish line. Frederik Andersen got the win to improve to 12-5-3 on the year after stopping all 25 shots faced for his 1st shutout of the season.

The Buffalo Sabres will look to rebound from back-to-back losses after a 3-2 overtime loss to Calgary last time out. Calgary opened the scoring late in the 1st before Buffalo tied the game at one with the lone goal of the 2nd period. Victor Olofsson gave Buffalo a 2-1 lead less than two minutes into the 3rd, but the lead wouldn’t last as Calgary tied the game at 2-2 just 2:06 later. The rest of the 3rd wouldn’t produce a winner, so it was off to OT where the Flames potted the game-winning goal just 1:17 into the extra frame. Linus Ullmark took the loss, falling to 5-5-2 after allowing all 3 goals on 29 shots faced in the losing effort.

The Leafs are playing some awesome hockey with Sheldon Keefe as the new bench boss, but I’m not a fan of Michael Hutchinson even as a backup and it doesn’t help that he hasn’t started in two and a half weeks. On the other hand, Buffalo’s struggling in their own right and at home is where they do their best work, but Toronto has had all of the recent success against the Sabres. Instead, I’m going to side with the over. The goaltending in this matchup has been suspect to say the least and I think this one easily eclipses 7-8 goals, so I’ll sit back and expect a high-scoring affair here.