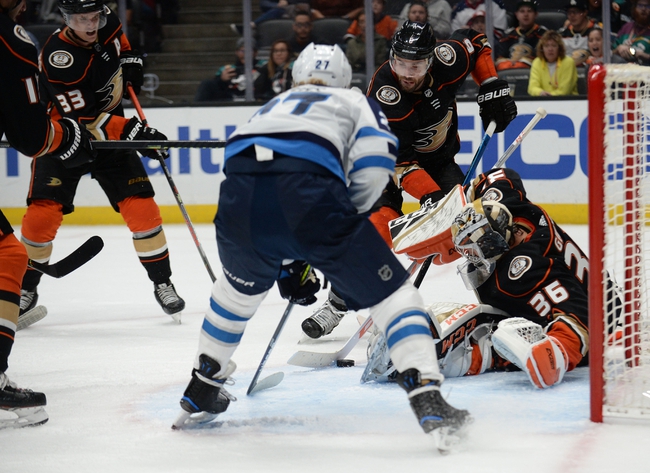 The Winnipeg Jets and the Anaheim Ducks meet in NHL action from the Honda Center on Friday afternoon.

The Winnipeg Jets will look to build on back-to-back wins after a 5-1 win over San Jose in their last outing. San Jose opened the scoring just before the midway point of the opening period before Patrik Laine and David Gustafsson pushed the Jets ahead 2-1 after 20 minutes of play. Mark Scheifele pushed Winnipeg 3-1in front and Jack Roslovic made it 4-1 by the end of the 2nd period. Kyle Connor added a 5th on an empty net when San Jose pulled their goaltender with over five minutes to go in the 3rd period. Connor Hellebuyck got the win to improve to 12-7-1 on the year after stopping 32 of 33 shots faced in the winning effort.

The Anaheim Ducks will look to rebound after a 4-3 shootout loss to Arizona last time out. Arizona opened the scoring just over three minutes into the game before Brendan Guhle tied the game just over three minutes later. Arizona re-took the lead with just under two minutes to go in the 1st. Sam Steel tied the game at two with the lone goal of the 2nd period before Troy Terry gave Anaheim the lead at the midway point of the 3rd. Arizona tied the game just :38 later, and the rest of the 3rd would fail to decide a winner. Overtime solved nothing, so it was off to the shootout where we went to the 4th round but Arizona would find the winner to send Anaheim back with another loss. John Gibson took the loss, falling to 8-10-2 after allowing 3 goals on 28 shots faced in defeat.

Anaheim’s had a lot of issues lately, and I’d like to say that it’s because they’ve been on the road, but the Ducks haven’t been winning at home either. Winnipeg’s had their moments as well, but the Jets are playing solid road hockey right now and are just the team in better form so I’ll side with Winnipeg here.