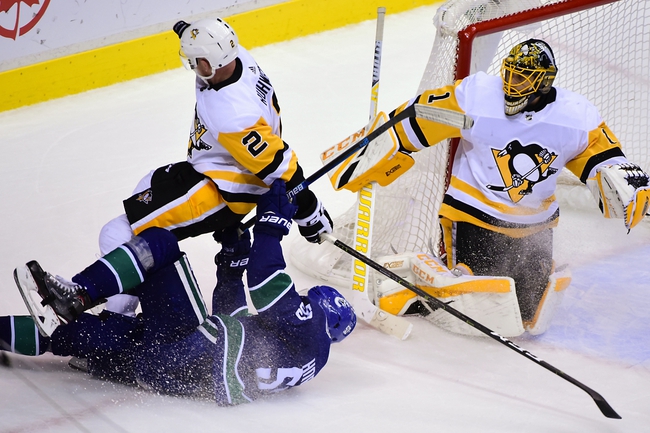 Where to watch: SN-Pacific, ATT-Pitt Stream live sports and exclusive originals on ESPN+. Sign up now!

The Vancouver Canucks and the Pittsburgh Penguins meet in NHL action from the PPG Paints Arena on Wednesday night.

The Vancouver Canucks come into this game looking to rebound after a 2-1 loss to Philadelphia in their last outing. J.T. Miller opened the scoring for Vancouver just after the midway point of the opening period. Philadelphia would tie the game at one early on in the 2nd and would push 2-1 ahead just after the midway point of the 3rd period. That was as close as Vancouver got as the Flyers would slam the door shut on any comeback attempt from the Canucks down the stretch. Thatcher Demko took the loss, falling to 5-3-1 on the year after allowing both goasl on 34 shots faced in the losing effort.

The Pittsburgh Penguins will look to build on back-to-back wins after a 3-2 overtime win over Calgary last time out. Calgary took a lead 7:34 into the game before Alex Galchenyuk tied the game up at one with just over eight minutes to go in the opening period. James McCann gave the Pens a 2-1 lead early in the 2nd before Calgary tied the game at two on the power play with just under five minutes to go in the middle period. The 3rd couldn’t find a winner, so it was off to overtime where we almost looked destined for a shootout before Jake Guentzel potted the winner for Pittsburgh with just under a minute to go. Tristan Jarry got the win to improve to 4-3-0 on the year after stopping 32 of 34 shots faced in the winning effort.

I’ve gone back and forth on this game as the road team’s had a lot of success, so the plus money could be worth a look. However, Vancouver’s scuffling right now, and while they’ve had some good days on the road, the bad days are more frequent right now. The Penguins have also dealt with their share of blows after losing Sidney Crosby to injury, but the Pens are still playing solid hockey in his absence and have been a tough out at home for years. I’ll side with Pittsburgh at home and take the Pens in regulation for a more favorable price.