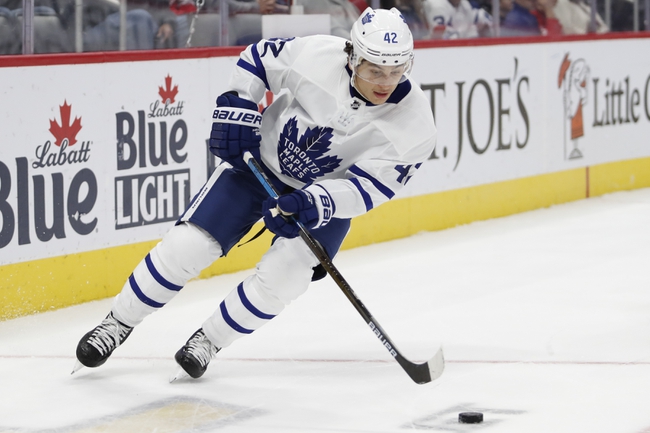 Where to watch: SN, FS-Detroit Stream live sports and exclusive originals on ESPN+. Sign up now!

The Toronto Maple Leafs and the Detroit Red Wings meet in an Atlantic division matchup in NHL action from Little Caesars Arena on Wednesday night.

The Toronto Maple Leafs will look to build on a 5-3 win over Colorado in their last outing for a 2nd straight win. Colorado opened the scoring just :31 into the game but Nick Shore and Auston Matthews would score 1:07 apart to push the Leafs 2-1 ahead and Tyson Barrie and Jasperi Kapanen would score as well to give Toronto a 4-1 lead after 20 minutes of play. Colorado pulled a goal back in the 2nd and made it 4-3 early on in the 3rd, but that’s as close as Colorado would get as Zach Hyman iced the win with an empty-net goal with less than a second to go. Frederik Andersen got the win to improve to 11-5-3 on the year after stopping 34 of 37 shots faced in the winning effort.

The Detroit Red Wings will look to rebound after a 6th straight loss, falling to Carolina at home by a final score of 2-0 last time out. The game was scoreless through the opening 20 minutes before Carolina took a lead just after the midway point of the 2nd period. The 1-0 score would hold up until Carolina added an empty-netter short-handed to seal the deal. Andreas Athanasiou, Tyler Bertuzzi and Darren Helm each had 3 shots on goal in the losing effort for Detroit. Jimmy Howard took the loss, falling to 2-10-1 on the year after allowing just one goal on 35 shots faced in the losing effort.

I’m a bit weary of backing Toronto here, as this seems like a prime spot for Toronto to rest Andersen and throw Mike Hutchinson in, who hasn’t been good this season and hasn’t started a game in a few weeks for Toronto. However, I just can’t back Detroit as the Red Wings are just playing bad hockey. Toronto’s appeared to find new energy under their new head coach and I think that Toronto wins this game handily, so I’ll take Toronto on the puck line to get some value out of the bet.