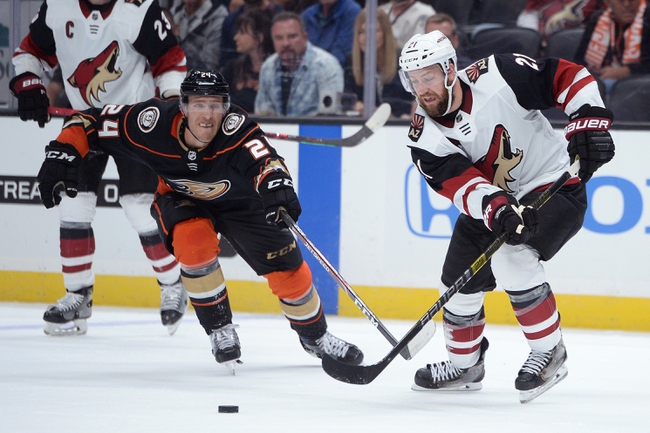 Where to watch: KCOP, FS-Arizona+ Stream live sports and exclusive originals on ESPN+. Sign up now!

The Anaheim Ducks and the Arizona Coyotes meet in a Pacific division matchup in NHL action from the Gila River Arena on Wednesday night.

The Anaheim Ducks will look to build on an impressive 3-0 win over the New York Islanders in their last outing. The game was scoreless through the opening 20 minutes before Ryan Getzlaf got the Ducks on the board just after the midway point of the 2nd period. Cam Fowler and Oliver Kase scored 1:11 apart later on in the 3rd period to stake the Ducks an eventually insurmountable 3-0 lead as Anaheim rode that cushion to the finish. John Gibson got the win to improve to 8-10-1 on the year after stopping all 26 shots he faced on the way to his first shutout of the season.

The Arizona Coyotes will look to rebound from a 4-3 shootout loss to the Edmonton Oilers in their last outing. Edmonton got on the board first just 2:05 into the game before Carl Soderberg tied the game at one on the power play just before the midway point of the opening period. Edmonton re-took the lead 1:22 into the 2nd before Christian Fischer tied the game at two and Vinnie Hinostroza gave Arizona a 3-2 lead just 1:33 after that. The ‘yotes carried the lead into the 3rd where Edmonton would find an equalizer with less than seven minutes to go. The rest of the 3rd couldn’t determine a winner and neither could the OT period, so it was off to a shootout where Arizona missed all three attempts while Edmonton scored on their first shot to take home the win and the extra point. Darcy Kuemper got the win to improve to 9-6-1 on the year after allowing 3 goals on 37 shots faced in regulation and OT as well as a goal on two shots in the shootout.

Anaheim looked really good against the Islanders and they’ve had a lot of success in this matchup, so the plus money would be worth a look. However, that win came at home, and Anaheim is still a tough team to get behind away from home, especially when John Gibson has lost 7 of his last 8 road starts. The Coyotes have cooled off a bit since their hot stretch a few weeks ago, but the Coyotes have still won 5 of their last 8 games and picked up points in six of eight. I’ll side with the Coyotes at home here.