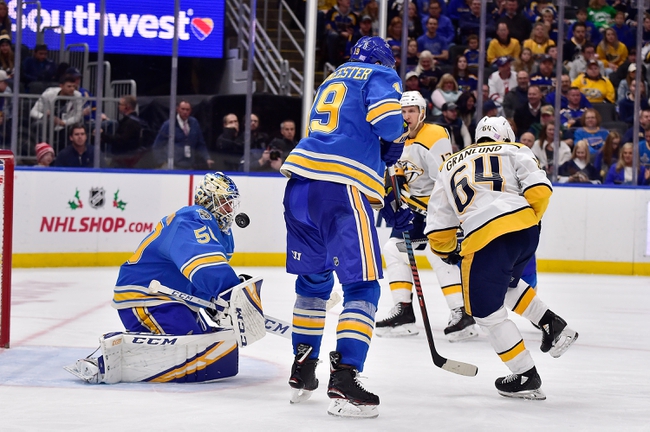 Where to Watch: FS-Midwest, FS-Tennessee Stream live sports and exclusive originals on ESPN+. Sign up now!

The St. Louis Blues and the Nashville Predators meet in the second half of a home and home set in NHL action from the Bridgestone Arena on Monday night.

The St. Louis Blues will look to get even with Nashville after the Predators stole a 4-2 win on the road on Saturday, snapping their six game losing streak in the process. Filip Foreberg opened the scoring for Nashville just :20 into the game before Mattias Ekholm doubled the lead just 3:20 later. Klim Kostin got St. Louis on the board with just over six minutes to go but the Preds would restore the two goal cushion with less than two minutes to go in the opening frame.

The game would stay at 3-1 through the 2nd and most of the 3rd before Jaden Schwartz made things interesting with a power play goal with 3:08 to go to make it 3-2, but that’s as close as the Blues got as Calle Jarnkrok iced the win with an empty-net goal with :31 to play to seatl the deal.

Juuse Saros got the win to improve to 2-5-1 on the year after stopping 24 of 26 shots faced in the winning effort while Jordan Binnington took the loss for St. Louis, allowing 3 goals on 42 shots faced in defeat.

Nashville got the harder part of the home and home set out of the way by winning on the road, and a sweep of St. Louis would be mighty impressive and a big step in the Predators shaking off that recent slump. However, this is still the defending Stanley Cup champion St. Louis Blues we are talking about here, and the Blues have been playing much better than Nashville has recently. I just need to see more from the Predators before declaring them back on track, and getting the Blues at plus money is too good to pass up here, so I’ll side with St. Louis for the split in this one.