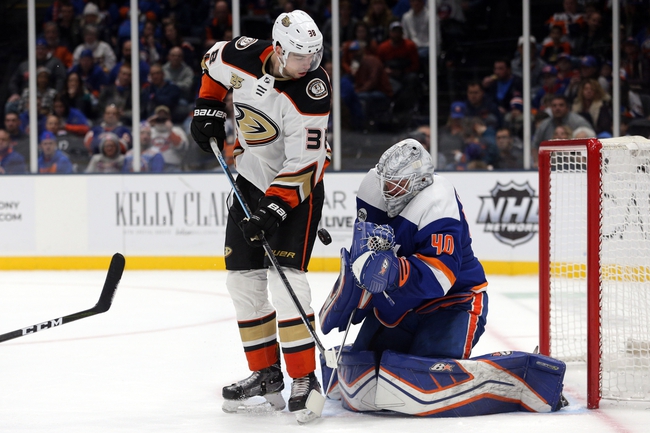 The New York Islanders and the Anaheim Ducks meet in NHL action from the Honda Center on Monday night.

The New York Islanders come into this game looking to extend their point streak which currently sits at 17 games after a 2-1 overtime loss to San Jose in their last outing. The game was scoreless through the opening 20 minutes before San Jose broke the deadlock 6:38 into the 2nd period. The lead lasted just :27 before Casey Cizikas tied the game at one for the Isles. That 1-1 score would hold through the 2nd and the 3rd period would be unable to find a winning goal, so it was off to overtime, where San Jose found the game winning goal on an odd man rush at the midway point of the extra frame. Semyon Varlamov got the OT loss to fall to 7-2-2 on the year in defeat.

The Anaheim Ducks will be out to snap a three-game losing streak after a 6-2 loss to Tampa Bay in their last outing. Tampa Bay opened the scoring late in the opening period before Derek Grant got the Ducks on the board just 1:52 later with a short-handed goal. Tampa Bay re-took the lead early in the 2nd, but Rickard Rakell would help the Ducks tie things up once again just 2:29 after that. The wheels would fall off less than five minutes later as Tampa Bay found a pair of goals 1:46 apart to go ahead 4-2 and added a pair in the 3rd for the final 6-2 line. Ryan Miller ended up with the loss, falling to 3-1-2 on the year after giving up all 6 goals on 27 shots faced in the losing effort.

I’d like to give Anaheim a look as a home dog, but the problem I’m having is that the Ducks provide no value after losing 8 of their last 9 games. Being at home hasn’t helped either as Anaheim’s lost 5 straight at home during this skid. New York tripped a bit against San Jose, but this is still a Islanders team on a torrid run, and at this price against a slumping Ducks team, I think you take it and run with it.