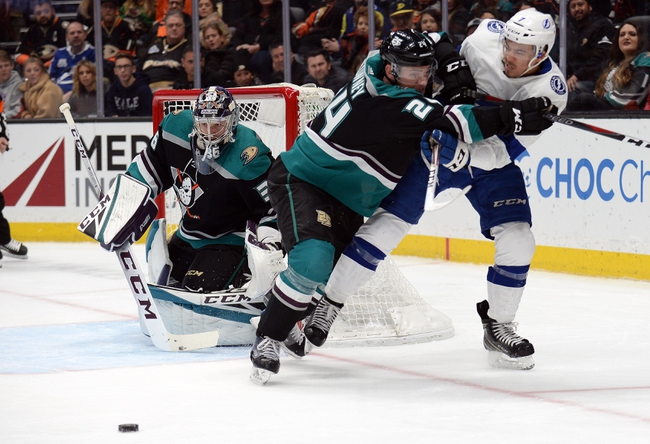 The Anaheim Ducks and the Tampa Bay Lightning meet in NHL action from Amalie Arena on Saturday night.

The Anaheim Ducks come into this game looking to rebound from back-to-back losses after a 5-4 overtime loss to Florida last time out. Max Jones opened the scoring for the Ducks with less than three minutes to go in the opening period before Nick Ritchie, Rickard Rakell and Oliver Kase pushed Anaheim ahead 4-0 late in the 2nd period. However, Florida pulled one back :14 later and another just :27 after that to make it 4-2 and scored a pair of goals 3:42 apart to tie the game at four late in the 3rd period. Florida completed the comeback with the overtime winner just :22 into the extra period. John Gibson got the OT loss, falling to 7-10-1 on the year after allowing 5 goals on 28 shots faced in the losing effort.

The Tampa Bay Lightning will look to build on a 4-2 win over Chicago last time out. Mikhail Sergachev gave the Bolts the lead with the lone goal of the opening period, and the lead would hold through the 2nd and into the 3rd where Chicago tied the game 8:27 into the 3rd. Tampa Bay responded just 1:17 later thanks to Anthony Cirelli and added a 3rd 2:41 after that with a Braydon Point tally to make it 3-1. The Blackhawks made things interesting late but the Bolts added an empty-net goal from Cedric Paquette to secure the win. Curtis McElhinney got the win to improve to 3-1-2 on the year after stopping 32 of 34 shots faced in the winning effort.

I’d like to give Anaheim a look here with the sizeable plus money, but the fact is that Anaheim just keeps finding ways to lose, and maybe it hit a new low, surrendering a 4-0 lead late in the 2nd to fall 5-4 to Florida. Tampa Bay hasn’t been dominant in the early going, but the Lightning are still a very good hockey team that do their best work at home and will make you pay for mistakes a heck of a lot quicker than most teams would. I’ll side with Tampa on the puck line here as a fade from Anaheim more than anything else.