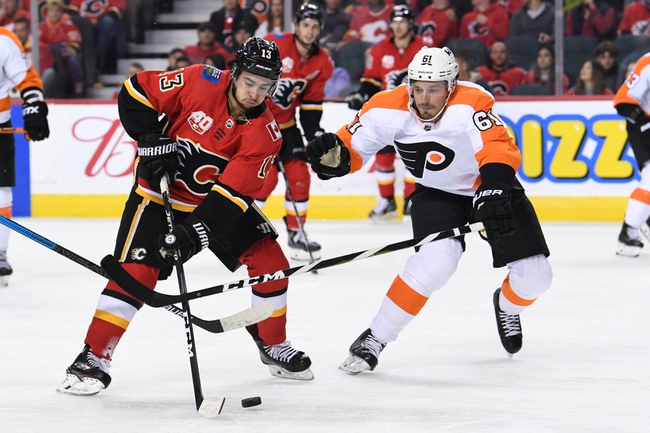 Where to watch: SN-West, NBCS-Philadelphia Stream live sports and exclusive originals on ESPN+. Sign up now!

The Calgary Flames and the Philadelphia Flyers meet in NHL action from the Wells Fargo Center on Saturday afternoon.

The Calgary Flames will be out to snap a six-game losing streak after a 5-0 loss to the St. Louis Blues in their last outing. St. Louis opened the scoring just after the midway point of the opening period before the Blues pushed 3-0 ahead after 40 minutes of play. The Blues added another pair of goals before the midway point of the 3rd period to go ahead with the final 5-0 score line. Elias Lindholm and Brandon Anderson each had a team-high 6 shots on goal while Rasmus Andersson added 4 shots on goal. David Rittich ended up with the loss, falling to 9-7-3 on the year after allowing 5 goals on 31 shots faced in the losing effort.

The Philadelphia Flyers will look to build on a 5-3 win over Carolina in their last outing. Carolina jumped out to an early 2-0 lead as the Hurricanes scored a pair of goals 1:20 apart, but Claude Giroux pulled one back for the Flyers just 1:48 later and Ivan Provorov tied the game on the power play just a few minutes later. Morgan Frost gave the Flyers the lead short-handed less than three minutes into the 2nd and would carry that lead into the 2nd intermission. Carolina tied the game early on in the 3rd but Giroux would score his 2nd of the game to help Philadelphia re-take the lead and Kevin Hayes added an empty net goal for insurance with :06 to play. Brian Elliott got the win to improve to 5-2-2 on the year after stopping 33 of 36 shots faced in the winning effort.

Calgary is sliding right now, to the point that the team is saying that the coaching staff and top players are safe, but it sure as heck doesn’t feel like it right now. The six-game skid has taken the Flames near the bottom of the division and Calgary hasn’t scored in three straight road games. There’s also the issue that these Calgary players who are used to Pacific time have to play at 1:00 EST, which translates to a 10:00 am puck drop. Those kinds of things aren’t easy to deal with when you have a Flyers team on the other side that’s been rock solid at home this year. I’ll lay the juice with the Flyers as the seat gets hotter for Calgary head coach Bill Peters.