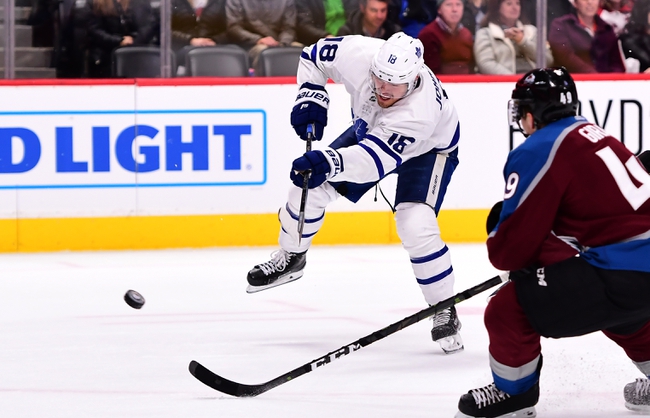 Where to watch: Sportsnet, Altitude Stream live sports and exclusive originals on ESPN+. Sign up now!

The Toronto Maple Leafs and the Colorado Avalanche meet in NHL action from the Pepsi Center on Saturday night.

The Toronto Maple Leafs will look to build on a 3-1 win over Arizona last time out to start the Sheldon Keefe era on the right foot. Tyson Barrie opened the scoring for Toronto with less than a minute to go in the opening period before Pierre Engvall doubled the advantage with his 1st NHL goal coming shorthanded. Auston Matthews scored in the opening minute of the 3rd to give Toronto an eventually insurmountable 3-0 lead before Arizona put in a consolation goal late in the period. Frederik Andersen got the win to improve to 10-5-3 on the year after stopping 30 of 31 shots faced in the winning effort.

The Colorado Avalanche will look to rebound after a 3-2 loss to the Minnesota Wild in their last outing. The game was scoreless through the opening 20 minutes before Minnesota scored a pair of goals :53 apart to open the 2nd period. Cale Makar singlehandedly pulled Colorado back level with a pair of goals 4:30 apart, sending us to the 3rd tied at two. Minnesota re-took the lead just before the midway point of the 3rd period and despite the Avs outshooting Minnesota 11-7 in the 3rd, Colorado wouldn’t find a game-tying goal. Philipp Grubauer took the loss, falling to 7-4-2 on the yard after allowing 3 goals on 31 shots faced in the losing effort.

I understand Colorado being favored at home, and Nazem Kadri gets his first crack at his former team in this one. However, I correctly called that the Leafs would bounce back in their first game under new head coach Sheldon Keefe, and I’m going to ride that for another day. Watching the game, you could tell that these Leafs are back to being excited when they’re playing, and having a new voice preaching the message appears to have brought life back to Toronto. I think that the coaching change was a turning point and getting Toronto at even money with their mojo back seems like a solid play to me on Saturday.