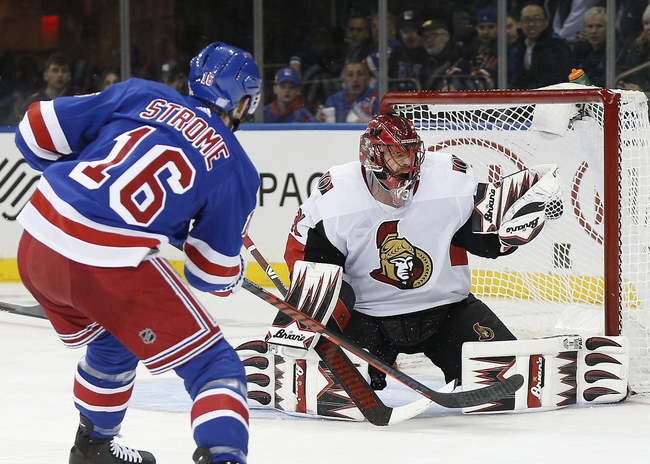 The New York Rangers and the Ottawa Senators meet in NHL action from the Canadian Tire Center on Friday night.

The New York Rangers come into this game looking to build on a 4-1 win over the Washington Capitals last time out. The game was scoreless through the opening 20 minutes before Artemi Panarin broke the deadlock 1:14 into the 2nd period. The 1-0 score would hold going into the 3rd, where Panarin would score his 2nd of the game and Pavel Buchnevich got on the scoresheet just :23 later to push New York ahead 3-0. Washington would pull a goal back just over three minutes later, but Brett Howden would quash any sort of comeback attempt by adding a 4th Rangers goal with just over six minutes to play in the 3rd as New York held on for the win. Henrik Lundqvist got the win to improve to 5-4-1 on the year after stopping 30 of 31 shots faced in the winning effort.

The Ottawa Senators will look to build on back-to-back wins after a 2-1 win over Montreal in their last outing. The game was tied at zero after the opening 20 minutes before Montreal got on the board first in the opening minute of the 2nd period. Jean-Gabriel Pageau would tie the game at one for Ottawa just before the midway point of the 2nd period. The game went to the 3rd tied at one, and the final period wouldn’t produce a winner, so it was off to overtime where Brady Tkachuk got the OT winner just :38 into overtime to give Ottawa the victory and the extra point. Craig Anderson got the win to improve to 4-7-0 after stopping 35 of 36 shots faced in the winning effort.

I’d like to give New York credit after their strong showing against Washington, but I just think the Rangers are due to regress. Ottawa hasn’t been great for a while, but they’re a much better team at home and aren’t far off from being a .500 team with wins in seven of their last 10 games. The Rangers have also had little success in this matchup, so I’ll lay the juice with Ottawa at home here.