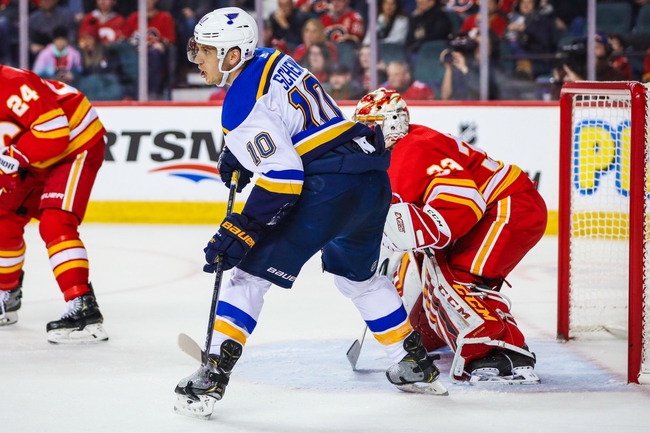 Where to Watch: FS-Midwest Stream live sports and exclusive originals on ESPN+. Sign up now!

The Calgary Flames and the St. Louis Blues meet in NHL action from the Enterprise Center on Thursday night.

The Calgary Flames will be out to snap a five-game losing streak after a 3-2 loss to Colorado in their last outing. Colorado jumped out to a 2-0 lead by the end of the 1st period and added a 3rd in the middle period. Derek Ryan pulled a goal back late in the 2nd and Anthony Mangiapane made it 3-2 with just over four minutes to go but that’s as close as the Flames got as Colorado shut the door the rest of the way. David Rittich took the loss, falling to 9-6-3 on the year after allowing 3 goals on 26 shots faced in the losing effort.

The St. Louis Blues will look to build on a 3-1 win over Tampa Bay in their last outing. Tampa Bay opened the scoring with the lone goal of the opening period before David Perron tied the game at one with the only goal of the 2nd period. Oskar Sundqvist gave St. Louis the lead and would hold onto that lead before Jaden Schwartz slammed the door shut with an empty-netter with :05 to go in the game. Jordan Binnington got the win to improve to 10-3-4 on the year after stopping 17 of 18 shots faced in the winning effort.

The Flames are due for a win, but I’m not sure that it comes here as Calgary’s had some issues in St. Louis for a couple of years now. St. Louis is playing some of the better hockey in the league over the last few weeks and I think the Blues keep it going with another win here, so I’ll side with the Blues in regulation to get a more favorable price and may put a bet on St. Louis on the puck line as well.