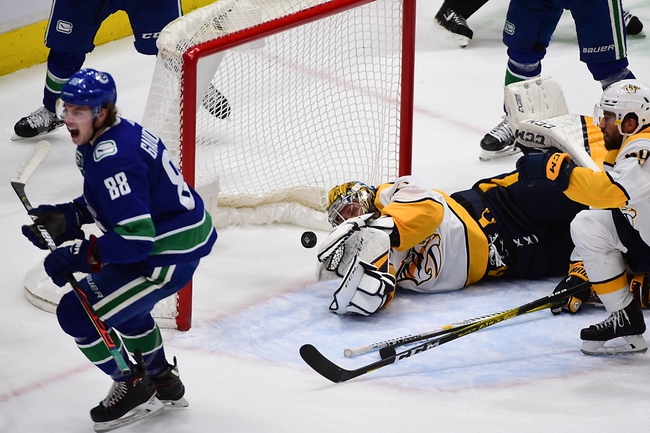 Where to watch: FS-Tennessee Stream live sports and exclusive originals on ESPN+. Sign up now!

The Vancouver Canucks and the Nashville Predators meet in NHL action from the Bridgestone Arena on Thursday night.

The Vancouver Canucks come into this game to snap a three-game losing streak after a 6-1 loss to Dallas last time out. Dallas opened the scoring with the lone goal of the opening period before doubling the lead just before the midway point of the 2nd period. Bo Horvat pulled one back 1:25 later, but that’s as close as Vancouver got as the Stars would score four unanswered goals the rest of the way to take the win and send the Canucks back empty-handed. Jacob Markstrom got the loss, falling to 5-6-3 on the year after allowing 6 goals on 31 shots faced in the losing effort.

The Nashville Predators will be out to snap a five-game skid after a 2-1 loss to Winnipeg in their last outing. Winnipeg opened the scoring just :18 into the game before doubling the lead early in the 2nd period. Nick Bonino pulled a goal back with less than two minutes to go in the frame, but that’s as close as the Predators got, despite outshooting the Jets 16-10 in the 3rd period and 39-25 in the game. Juuse Saros took the loss, falling to 1-5-1 on the year after allowing both goals on 25 shots faced in the losing effort.

It’s hard to pick a side between two struggling clubs, but I’m not laying this kind of price with Nashville given how they’ve struggled over the last couple of weeks. I’d lean towards Vancouver, but the Canucks haven’t had much luck in Nashville in their own right and have lost their last 3 road games by a combined score of 15-4. Instead, I’m going to side with the over. Both teams have had issues keeping the puck out of the net, but there’s still offensive talent on both sides as well and when these two met just last week, the game finished 5-3. Look for another high-scoring affair here.