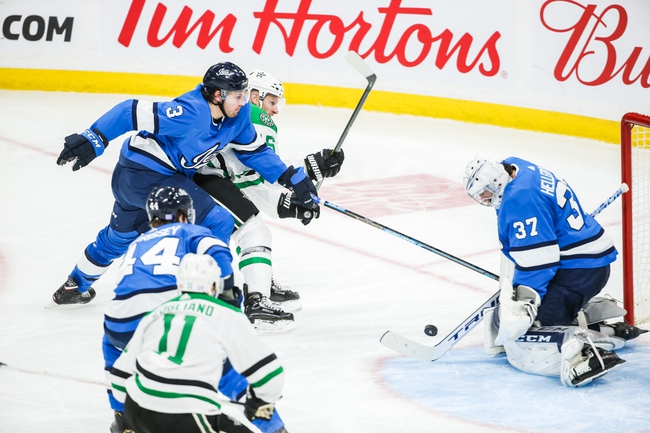 Where to Watch: TSN3, FS-Southwest Stream live sports and exclusive originals on ESPN+. Sign up now!

The Winnipeg Jets and the Dallas Stars meet in NHL action from the American Airlines Center on Thursday night.

The Winnipeg Jets come into this game looking to add to their current three-game winning streak after a 2-1 win over Nashville in their last outing. Patrik Laine opened the scoring just :18 into the game and the Jets would hold onto that lead until the 2nd period where Nikolaj Ehlers doubled the lead less than four minutes into the 2nd. Nashville would pull one back with less than two minutes to go in the middle period. Nashville outshot Winnipeg 16-10 in the 3rd but couldn’t find an equalizer in the 3rd as the Jets held on for the win. Connor Hellebuyck got the win to improve to 10-6-1 on the year after stopping 38 of 39 shots faced in the win.

The Dallas Stars will look to extend their nine game point streak after making it four straight victories with a 6-1 beatdown of Vancouver in their last outing. Jamie Benn opened the scoring with the lone goal of the opening frame before doubling his tally with his 2nd of the game on the power play just before the midway point of the 2nd period. Vancouver pulled a goal back just 1:25 after that. That’s as close as the score was the rest of the way as Taylor Fedun restored the two goal cushion 2:13 after Vancouver’s tally. Miro Heiskanen and Justin Dowling opened the 3rd with a pair of goals :42 apart and Corey Perry added a 6th goal for good measure just over five minutes later. Ben Bishop got the win to improve to 7-5-1 on the year after stopping 32 of 33 shots faced in the winning effort.

This game pits two of the hotter teams in the league against each other, and the plus money is definitely tempting considering that Winnipeg has won 10 of the last 13 head-to-head meetings, including the last meeting on November 10th, which is separating Dallas from a nine game point streak and a nine game winning streak. However, the home team has had the majority of the recent success between the two sides, and you have to think that Dallas wants revenge after the OT loss to Winnipeg almost two weeks ago. I think Dallas knows how important this game is to continuing their momentum, so I’ll side with the Stars at home for the win in regulation and since the last meeting was the only one of the last ten to be decided by a single goal, I’ll put a little bit on Dallas on the puck line as well.