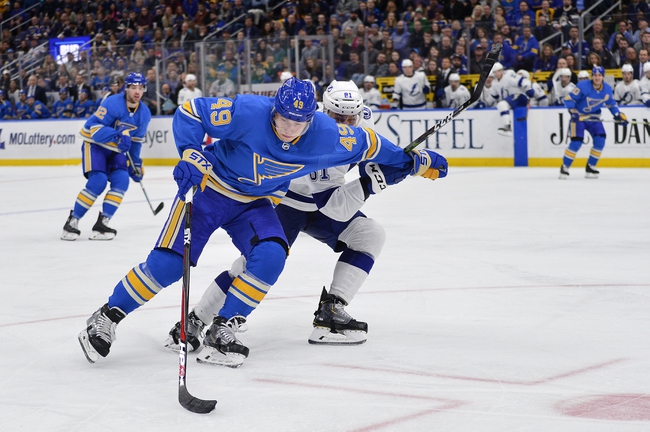 Where to watch: NBCS, FS-Midwest Stream live sports and exclusive originals on ESPN+. Sign up now!

The Tampa Bay Lightning and the St. Louis Blues meet in NHL action from the Enterprise Center on Wednesday night.

The Tampa Bay Lightning will look to bounce back after a 4-3 loss to the Winnipeg Jets in their last outing. Winnipeg opened the scoring just 1:59 into the game before Victor Hedman tied the game at 1-1 with :49 to go in the opening period. Winnipeg re-took the lead and went ahead 3-1 by the end of the 2nd period. Steven Stamkos made things interesting with 2:16 to go to make it 3-2, before Winnipeg responded with an empty-net goal. Anthony Cirelli scored with :22 to go to make it interesting again, but it was too little too late as the Jets held on for the win. Andrei Vasilevskiy took the loss, falling to 7-5-0 on the year after allowing 3 goals on 26 shots faced in the losing effort.

The St. Louis Blue will look to rebound and snap a three-game losing skid after a 4-1 loss to Anaheim at home last time out. Anaheim jumped ahead 2-0 in a span of 1:41 early on in the opening period before Vince Dunn pulled a goal back for the Blues early on in the 2nd period. Anaheim scored to restore the two-goal cushion and added an empty-net goal late for good measure late in the 3rd to secure the win and send St. Louis back empty-handed. Jordan Binnington took the loss, falling to 9-3-4 after giving up 3 goals on 24 shots faced in the defeat.

I’ve gone back and forth on this game, but even though St. Louis has lost 3 straight coming into this one, I’m still going to back the Blues here. Tampa Bay hasn’t looked all that great for the most part early on, and while they’ve scuffled lately, St. Louis has still been playing some solid hockey over the last month. Binnington also held a 1.45 GAA against Tampa Bay last season, so I’ll take a shot with St. Louis and the even money here.