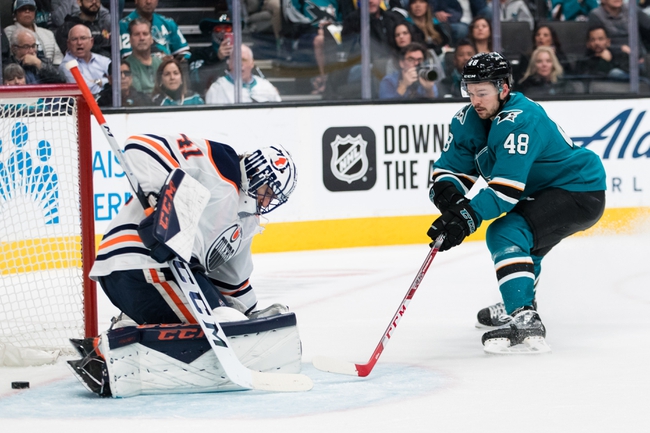 Where to watch: SN-West, NBCS Stream live sports and exclusive originals on ESPN+. Sign up now!

The Edmonton Oilers and the San Jose Sharks meet in NHL action from the SAP Center on Wednesday night.

The Edmonton Oilers will look to rebound after a 5-4 overtime loss to Dallas in their last outing. Dallas opened the scoring just under nine minutes into the game before Jujhar Khaira tied the game just :11 later. Leon Draisaitl pushed the Oilers ahead 2-1 with a goal in the last minute of the period. Dallas tied the game within the first minute of the 2nd before Khaira re-took the lead for Edmonton with his 2nd goal of the game and Ethan Bear pushed Edmonton ahead 4-2. Dallas would tie the game late in the 3rd and send this game to overtime, completing the comeback just 1:14 into the extra period. Mikko Koskinen got the OT loss to fall to 7-1-2 on the year as a result after allowing 5 goals on 36 shots faced in the defeat. The San Jose Sharks will look to add to their current six game winning streak after a 4-3 shootout win over Detroit last time out. Kevin Labanc opened the scoring for the Sharks with just over a minute to go in the opening period before Marc-Edouard Vlasic doubled the lead just 1:11 into the 2nd period. Detroit responded just :13 later and would tie the game at two just after the midway point of the 2nd period. Erik Karlsson helped the Sharks re-take the lead just 58 seconds later and the Sharks almost held on but Detroit would tie the game with just over four minutes to go, sending us to overtime. The fourth period solved nothing, so it was off to the shootout where Labanc found the back of the net while Detroit missed all three of their attempts. Martin Jones got the win to improve to 8-7-1 on the year after giving up 3 goals on 28 shots faced in regulation and OT as well as 3 stops on 3 shots faced in the shootout.

The plus money with Edmonton is tempting as the Oilers have the talent that’s fully capable of stopping San Jose’s win streak with the likes of McDavid and Draisaitl in the lineup. However, I’m still a bit weary about Mike Smith in net for Edmonton, and the Sharks have appeared to really turn a corner after their sluggish start, so I’ll lay the juice with the Sharks to keep their winning streak alive.