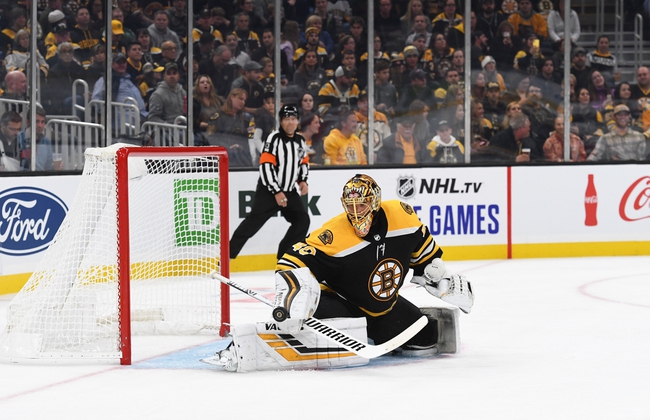 The Boston Bruins and the New Jersey Devils meet in NHL action from the Prudential Center on Wednesday night.

The Boston Bruins will look to rebound from a 3-2 shootout loss to Washington in their last outing. Charlie Coyle opened the scoring for the B’s just after the midway point of the opening period before Washington tied the game just 2:55 later. David Pastrnak re-took the lead for Boston 3:30 into the 2nd period and the Bruins would ride that lead through the 2nd and hold it for most of the 3rd before Washington tied the game with just :59 to play. Overtime solved nothing so it was off to the shootout where Charlie Coyle scored for the Bruins but Washington would also score leading us to sudden death. The Bruins would miss their two sudden death shots while Washington scored in round 5 to pick up the win. Jaroslav Halak ended up with the loss, falling to 4-1-3 after giving up a pair of goals on 44 shots faced in the loss.

The New Jersey Devils will look to build on back-to-back wins after a 4-3 overtime win over Montreal in their last outing. Montreal opened the scoring late in the opening period before Nikita Gusev tied the game at one just one minute later. Montreal surged ahead 3-1 in the 2nd period before Nico Hischier pulled a short-handed goal back with :02 to go, making it 3-2 heading to the 3rd period. Wayne Simmonds would tie the game for the Devils with less than five minutes to go and Kyle Palmieri would complete the comeback just 1:30 into overtime to help give the Devils the win. MacKenzie Blackwood got the win to improve to 7-4-3 on the year after stopping 31 of 34 shots faced in the winning effort.

New Jersey at plus money could be worth a look at home, and maybe now that the Devils have moved past Cory Schneider, the goaltending can take a step in the right direction. However, this just feels like a bad spot for the Devils as you have a Boston team that’s eager to get back on track going against a New Jersey team that they’ve owned in recent years. This price is too good to pass on so I’ll lay the juice with Boston here and make a play on the Bruins in regulation time and on the puck line as well.