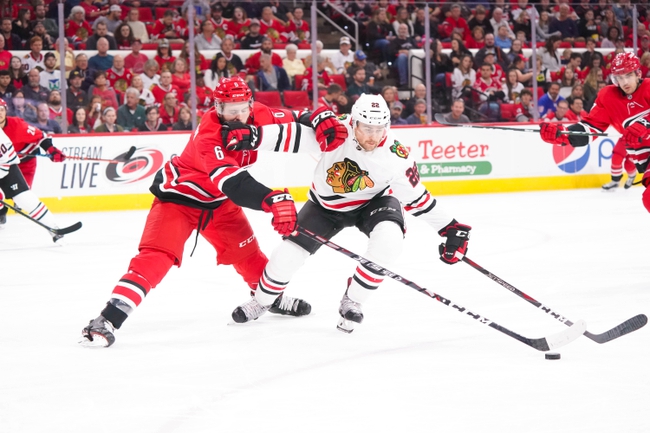 Where to Watch: FS-Carolina, NBCS-Chicago Stream live sports and exclusive originals on ESPN+. Sign up now!

The Carolina Hurricanes and the Chicago Blackhawks meet in NHL action from the United Center on Wednesday night.

The Carolina Hurricanes come into this game looking to add to their current three game winning streak after a 4-3 overtime win over Minnesota in their last outing. Joel Edmundsson opened the scoring for the ‘Canes just under four minutes in and doubled the lead 2:01 later and rode that lead into the 2nd. Minnesota pulled a goal back before Will Foegele restored the two-goal cushion. The Hurricanes would give up the lead by the end of the 2nd as the Wild scored a pair of tallies 1:21 apart. The 3rd period didn’t decide a winner, so it was off to OT where Andrei Svechnikov buried the winner for Carolina. James Reimer got the win to improve to 3-4-0 after stopping 32 of 35 shots faced in the winning effort.

The Chicago Blackhawks will be looking to add to their current four game winning streak after a 4-1 win over Buffalo last time out. Kirby Dach opened the scoring for Chicago in the 1st and doubled the lead in the 2nd with his 2nd goal of the game. Patrick Kane pushed the lead to 3-0 early in the 3rd and Jonathan Toews made it 4-0 just before the midway point of the 3rd. Buffalo pulled a goal back just :42 later, but it wasn’t enough as Chicago held on for the win. Corey Crawford got the win to improve to 4-4-2 on the year after stopping 33 of 34 shots faced in the winning effort.

I get Carolina being favored as they’ve been the team in better form for much of the season and have had Chicago’s number in recent meetings. However, Carolina hasn’t had much competition in their three game winning streak, with wins over a bad Ottawa team and a bad Minnesota team sandwiching their win over Buffalo. Chicago on the other hand has taken down Vegas, Toronto, Nashville and Buffalo in their four game winning streak. Add in the fact that the Hawks are at home, and I think you have to give the plus money with the Blackhawks a serious look here.