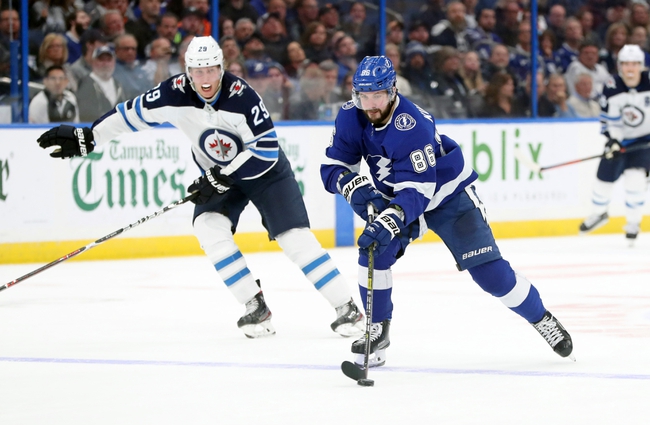 Where to watch: TSN3, SunSports Stream live sports and exclusive originals on ESPN+. Sign up now!

The Winnipeg Jets and the Tampa Bay Lightning meet in NHL action from Amalie Arena on Saturday.

The Winnipeg Jets will look to build on a 4-3 win over the Florida Panthers in their last outing. The game was scoreless through the opening period before Josh Morrissey gave the Jets the lead just under four minutes into the 2nd period. Florida pulled one back to tie it, sending us to the 3rd period deadlocked. Nikolaj Ehlers gave the Jets the lead back before Florida tied the game once again. Mark Scheifele gave Winnipeg a 3-2 lead and Adam Lowry added an insurance goal just 2:10 later. Florida made it 4-3 with just 1:34 to go, but that’s as close as Florida would get as the Jets would hold on for a huge road win. Laurent Brossoit got the win to improve to 3-2-0 after stopping 34 of 37 shots faced in the winning effort.

The Tampa Bay Lightning will look to add to their current three game winning streak after a 9-3 rout of the New York Rangers in their last outing. Luke Schenn opened the scoring 2:39 into the game before Alex Killorn, Nikita Kucherov and Ondrej Palat scored three goals in a span of 1:01 to give Tampa Bay a 4-0 lead just 6:42 into the game. New York pulled a goal back late in the 1st, but Tampa Bay would continue their onslaught, scoring 4 goals in the 2nd with markers from Steven Stamkos, Patrick Maroon, Kevin Shattenkirk and the previously mentioned Allex Killorn potting his 2nd of the game to make it 8-1 heading to the 3rd. a pair of Rangers goals sandwiched a Yanni Gourde power play tally, making it 9-3 at the final horn. Andrei Vasilevskiy got the win to improve to 7-4-0 after stopping 20 of 23 shots faced in the winning effort.

I’ve gone back and forth on this game, as I think Tampa Bay wins, but I’m not paying this ridiculous money line price and the puck line doesn’t hold much value to me as Winnipeg’s been good on the road. Instead, I’m going to side with the over. Tampa Bay’s scored 17 goals during their three game winning streak and I think that the Bolts light the lamp quite a bit here. On the other hand, Winnipeg is top-5 in the NHL in road offense and I think that the Jets can pot a few of their own in a 4-3 or 5-4 kind of game so I’ll side with the over here.