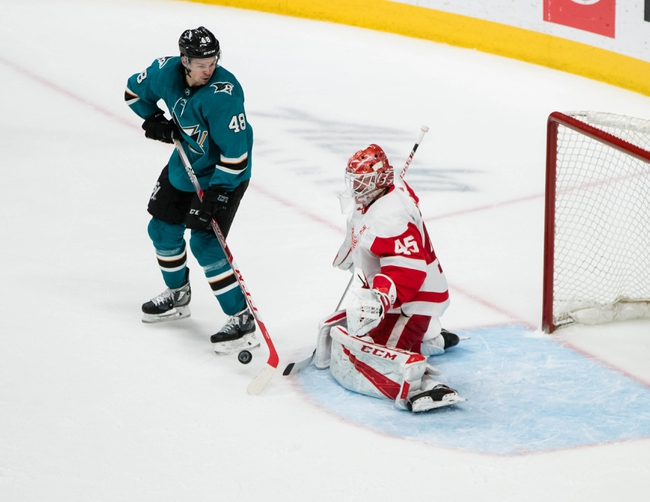 Where to Watch: FS-Detroit, NBCS-California Stream live sports and exclusive originals on ESPN+. Sign up now!

The Detroit Red Wings and the San Jose Sharks meet in NHL action from the SAP Center on Saturday night.

The Detroit Red Wings will look to bounce back after a 3-2 overtime loss to the Los Angeles Kings last time out. Los Angeles opened the scoring with the lone goal of the opening period before Tyler Bertuzzi tied the game 4:36 into the 2nd period, sending us to the 3rd period tied at 1-1. Bertuzzi gave Detroit the lead with his 2nd goal of the game just under three minutes into the 3rd but the Wings couldn’t hold on as Los Angeles tied the game with less than two minutes to go and found the overtime winner just :23 into the extra frame. Jonathan Bernier ended up with the loss, falling to 5-4-2 after stopping 28 of 31 shots faced in the losing effort.

The San Jose Sharks will look to build on their five game winning streak after a 5-3 win over Anaheim last time out. Anaheim took the lead just 1:09 into the game before Tomas Hertl tied the game just over five minutes later. Anaheim restored the lead with seven minutes to go in the 2nd period before Hertl tied the game again with his 2nd goal of the game with 1:32 to go in the 2nd period. Brent Burns and Evander Kane scored 2:27 apart to push the Sharks 4-2 ahead before Anaheim responded with just over four minutes to go to make things interesting at 4-3. That was as close as the Ducks got though, as Logan Couture scored to make it 5-3 and slam the door shut on any comeback attempt. Martin Jones got the win to improve to 7-7-1 on the year after stopping 29 of 32 shots faced in the winning effort.

The heavy plus money with Detroit is tempting given their recent success, but let’s not forget that this is still a Detroit team that recently lost 11 of 12 games and has just three wins in 11 road games this season. San Jose is on fire right now and they’ve historically been a strong team at home. I’m not trying to lay this kind of juice with the Sharks though, so I’ll take a shot with San Jose on the puck line to bring down the price.