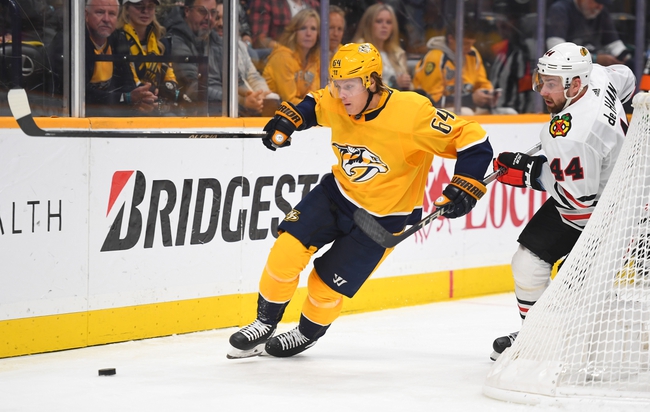 The Chicago Blackhawks and the Nashville Predators meet in a Central division clash in NHL action from Bridgestone Arena on Saturday night.

The Chicago Blackhawks will look to build on back-to-back wins after a 5-3 win over Vegas in their last outing. Vegas jumped out to a 2-0 lead within the first six and a half minutes of the game before Chicago pulled a goal back :16 after Vegas made it 2-0 to make the score 2-1 heading into the 2nd. Calvin de Haan and Erik Gustafsson helped Chicago tie the game and take the lead by the end of the 2nd period. Kirby Dach added a 4th less than 4 minutes into the 3rd period and Dylan Storme made it 5-2 before Vegas pulled a consolation goal back with a minute to go in the 3rd. It was too little too late for Vegas as Chicago held on for the win. Corey Crawford got the win to improve to 3-4-2 after stopping 39 of 42 shots faced in the winning effort.

The Nashville Predators will be out to snap a three game losing streak after a 5-3 loss to Vancouver in their last outing. The game was scoreless through the opening 20 minutes before Vancouver took the lead just 1:25 into the 2nd period. Calle Jarnkrok responded, giving us a 1-1 tie heading into the 3rd. Vancouver re-took the lead just over six minutes into the 3rd, before Mikael Granlund tied the game at two just 2:26 later. Vancouver pushed ahead 4-2 with a pair of goals :42 apart before Filip Forsberg pulled one back for Nashville to make it 4-3. That was as close as the Predators got though, as Vancouver added an empty net goal to secure the win. Pekka Rinne ended up with the loss, falling to 8-2-2 after allowing 4 goals on 25 shots faced in the losing effort.

I understand the Predators being favored at home as they’ve already beat the Blackhawks 3-0 here just a couple of weeks ago. However, while I’ve knocked on Chicago over the course of the young season, the fact is that the Blackhawks have been highly competitive lately, picking up a point in 6 of 7 games in the month of November, with 5 of those games being on the road. I just think if you were going to take a chance on Chicago and the plus money, it’s probably here so I’ll take a shot with the Blackhawks here.