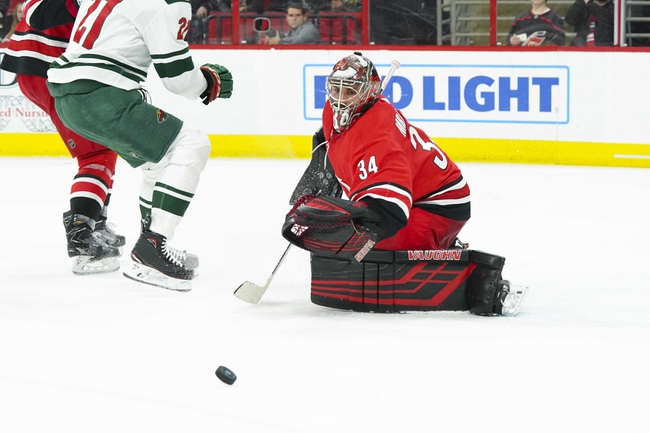 The Carolina Hurricanes and the Minnesota Wild meet in NHL action from Xcel Energy Center on Saturday afternoon.

The Carolina Hurricanes will look to build on back-to-back wins after a 5-4 win over the Buffalo Sabres last time out. Buffalo opened the scoring just over four minutes into the game but Carolina would turn things around and take a 2-1 lead by the end of the 1st thanks to goals from Jordan Staal and Sebastian Aho. Teuvo Teravainen pushed the ‘Canes 3-1 ahead within the 1st minute of the 2nd period. Buffalo pulled one back by the end of the 2nd and tied the game after the midway point of the 3rd period. Andrei Svechnikov gave Carolina the lead on the power play with less than four minutes to go in the game. Carolina almost held on before Buffalo tied the game with :41 to go in the game. Dougie Hamilton scored the game winner just before the midway point of the overtime period to get the Hurricanes the victory. Petr Mrazek got the win to improve to 9-3-1 after stopping 29 of 33 shots faced in the winning effort.

The Minnesota Wild will look to build on a 3-2 win over the Arizona Coyotes in their last outing. Kevin Fiala opened the scoring for Minnesota with the lone goal of the opening period before Arizona tied the game up with the only goal of the 2nd period. The game would head to the 3rd period tied up at one where Zach Parise would give Minnesota the lead. Arizona would tie the game less than two minutes later, but Jordan Greenway would give the Wild the lead for good with just under eight minutes to go. Devan Dubnyk got the win to improve to 4-8-1 on the year after stopping 27 of 29 shots faced in the winning effort.

The Wild have played better at home, but the Coyotes had been playing in their third city in four days when they lost in Minnesota, and I still have my doubts about the Wild as a whole. Carolina has had their hiccups after their hot start, but the Hurricanes have bounced back with a vengeance over the last couple of games, scoring 13 goals in their back-to-back victories. I just think that Carolina is still a lot more trustworthy even on the road than Minnesota is. I’ll lay the juice on the road with the Hurricanes here.