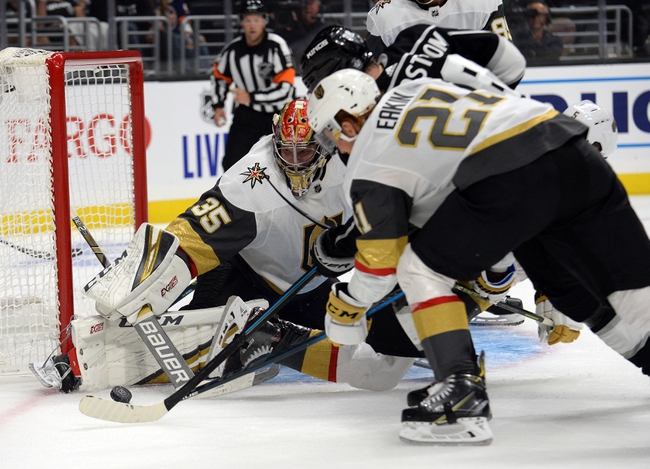 The Vegas Golden Knights and the Los Angeles Kings meet in NHL action from the Staples Center on Saturday.

The Vegas Golden Knights will look to snap a four game losing streak after a 5-3 loss to Chicago in their last outing. William Carrier opened the scoring less than three minutes in before William Karlsson doubled lead just 3:31 later. Chicago pulled a goal back just :16 later and would tie the game just over four minutes into the 2nd and took a 3-2 lead just :45 later. Chicago pushed ahead 4-2 just under four minutes into the 3rd and went up 5-2 with just over three minutes to go. Nate Schmidt pulled a goal back with a minute to go, but it was too little too late as Chicago held on for the win. Marc-Andre Fleury ended up with the loss, falling to 9-6-1 after allowing 5 goals on 26 shots in the losing effort.

The Los Angeles Kings will look to build on back-to-back wins after a 3-2 overtime win in their last outing over Detroit. Anze Kopitar opened the scoring with the lone goal of the opening period before Detroit tied the game at one with the lone goal of the 2nd period. Detroit forged ahead 2-1 early in the3rd and the Kings looked like they were headed for a loss before Adrian Kempe tied the game with less than two minutes to go. We were going to overtime, where Alex Iafallo found the winner just :23 into the extra period. Jonathan Quck got the win to improve to 4-8-0 on the year after stopping 19 of 21 shots faced in the winning effort.

I kind of understand Vegas being favored as the Golden Knights are probably the better team and are due for a breakout to snap this losing streak which would tie the franchise record for the longest losing streak at 5 games. However, as much as I’ve been on L.A.’s case all season, the Golden Knights are struggling right now and Los Angeles has won their last three home games. I wouldn’t go near this game, but I think if there was a time and place to side with the Kings and the plus money, it’s here.