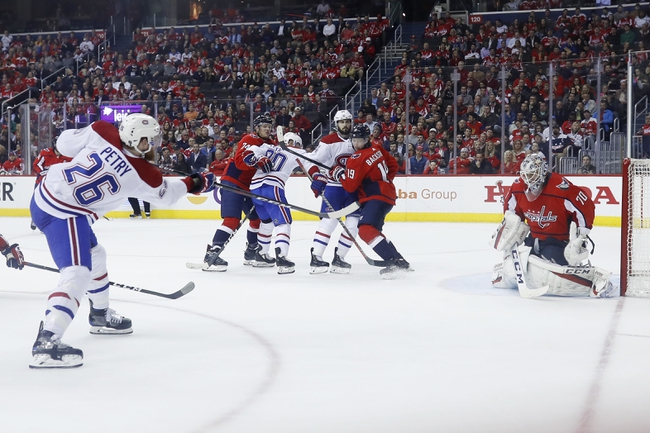 Where to Watch: TSN2, NBCS-Washington Stream live sports and exclusive originals on ESPN+. Sign up now!

The Montreal Canadiens and the Washington Capitals meet in NHL action from the Capital One Arena on Friday night.

The Montreal Canadiens will look to build on back-to-back wins after a 3-2 shootout victory over Columbus last time out. Columbus opened the scoring late in the 1st period, and that goal would hold up through the 2nd period before Brendan Gallagher tied the game at one early in the 3rd period. Columbus would re-take the lead with less than two minutes to play, but Montreal would fight back and Tomas Tatar would tie the game up at two, sending us to some extra hockey. Overtime solved nothing, so it was off to the shootout where Jonathan Drouin scored the lone goal out of all 6 shooters to pick up the win for the Habs. Carey Price got the win to improve to 9-4-2 on the year after stopping 33 of 35 shots faced in the winning effort, as well as all 3 shots faced in the shootout.

The Washington Capitals will look to build on a 2-1 shootout win over the Philadelphia Flyers last time out. Brandon Leipsic opened the scoring for the Caps in the 1st period, and that goal would hold the lead through the 1st, all of the 2nd and the beginning of the 3rd before Philadelphia tied the game on the power play just under seven minutes into the 3rd period. The game wouldn’t be decided in regular time, so it was off to overtime which solved nothing, followed by the shootout. T.J. Oshie and Evgeny Kuznetsov would score while Philadelphia missed two of their three attempts to give the Caps another win. Braden Holtby got the win to improve to 9-1-3 on the year after stopping 30 of 31 shots faced in the winning effort.

The plus money with Montreal is tempting, but Washington just looks like their back on one of those runs that we see from the Capitals every year, a run that just comes out of nowhere and you just have to keep blindly going with Washington until it stops paying off. The Capitals just keep finding ways to win and I expect that to continue here so I’ll side with Washington at home in this one.