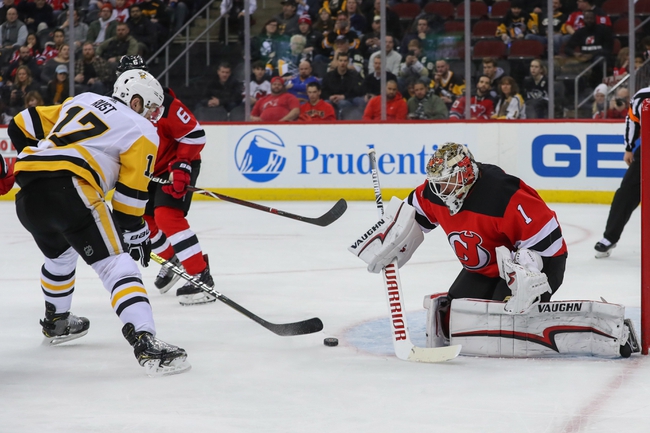 The Pittsburgh Penguins and the New Jersey Devils meet in a Metropolitan division clash in NHL action from the Prudential Center on Friday night.

The Pittsburgh Penguins will look to bounce back after a 3-2 overtime loss to the New York Rangers in their last outing. New York jumped out to a 2-0 lead in the opening 20 minutes of play before Pittsburgh responded with goals from Justin Schultz and Jared McCann in the 2nd period to tie the game up at two. The 3rd period wouldn’t produce a winner, so it was off to overtime where New York found the game-winner just before the midway point of the extra period. Matt Murray took the loss, falling to 9-3-2 after allowing 3 goals on 27 shots faced in the losing effort.

The New Jersey Devils will look to bounce back after a 4-2 loss at home to New Jersey in their last outing. Wayne Simmonds opened the scoring just 4:19 into the game before Ottawa tied the game at one with just over five minutes to go. Will Butcher gave the Devils a 2-1 lead just under three minutes later, and that score would hold through the entire 2nd period and the first half of the 3rd period before Ottawa tied the game at two with six and a half minutes to go. The Sens broke the tie with just over two minutes to go in the 3rd and added an empty net goal with :26 to go to secure the win. MacKenzie Blackwood got the loss to fall to 5-4-3 on the year after allowing 3 goals on 24 shots faced in the losing effort.

The Devils continue to frustrate me, as when I back them they lose, and when I go against them, they win. With that said, I’m going to give New Jersey another shot here. The Penguins just lost leading scorer and captain Sidney Crosby for 6 weeks after hernia surgery, so there’s going to be some time needed to re-adjust and tweak the lines. The underdog’s had a lot of success in this matchup, and the injury situation seems to have cooked up a perfect storm for it to happen again. I’ll take a stab at New Jersey and the plus money here.