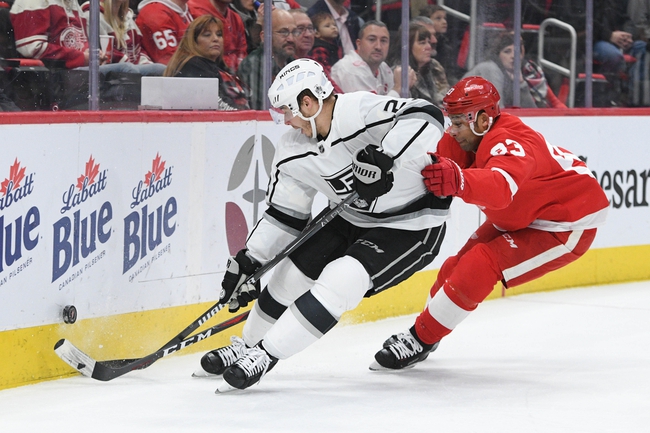 Where to watch: FS-Detroit, FS-West Stream live sports and exclusive originals on ESPN+. Sign up now!

The Detroit Red Wings and the Los Angeles Kings meet in NHL action from the Staples Center on Thursday night.

The Detroit Red Wings will look to add to their current three game winning streak after a 4-3 overtime win over Anaheim in their last outing. The game was scoreless through 20 minutes of play before Anaheim scored a pair of goals :29 apart to take an early 2-0 lead before Filip Hronek got Detroit on the board. Anaheim restored their two goal cushion before Andreas Athanasiou pulled one back again for Detroit with less than three minutes to go in the 2nd period. Detroit looked like they were headed for a loss before Dylan Larkin saved the day, tying the game with :37 to go, sending us to OT. Dennis Cholowski scored for the Wings just over two minutes into OT to secure the win and the extra point and push Detroit’s winning streak to three. Jonathan Bernier got the win to improve to 5-4-1 on the year after stopping 24 of 27 shots faced in the winning effort.

The Los Angeles Kings will be out to build on a 3-1 win over the Minnesota Wild last time out. Anze Kopitar opened the scoring for the Kings just 1:10 into the game before Jeff Carter doubled the lead for the Kings just after the midway point of the 2nd period. Minnesota pulled a goal back with just over four minutes to go in the 2nd, but that’s as close as the Wild got as Los Angeles added an empty net goal from Sean Walker to lock things up and pick up the win. Jonathan Quick got the win to improve to 3-8-0 on the year after stopping 27 of 28 shots faced in the winning effort.

I get Los Angeles being favored because they’re at home, and a win over Minnesota may help their confidence. However, Los Angeles still isn’t a team I’m trying to back long term, and the Wild haven’t been a good road team for much of the season so it’s hard for me to really buy into that win. Detroit’s playing with confidence right now, and it’s not just a bunch of schmucks they’ve been beating, they took down, Boston, Vegas and Anaheim , beating the Ducks on the road, where Anaheim has been a strong team at home. I just think there’s value to be had with Detroit, so until it stops paying off, I’ll take the Red Wings and the plus money here.