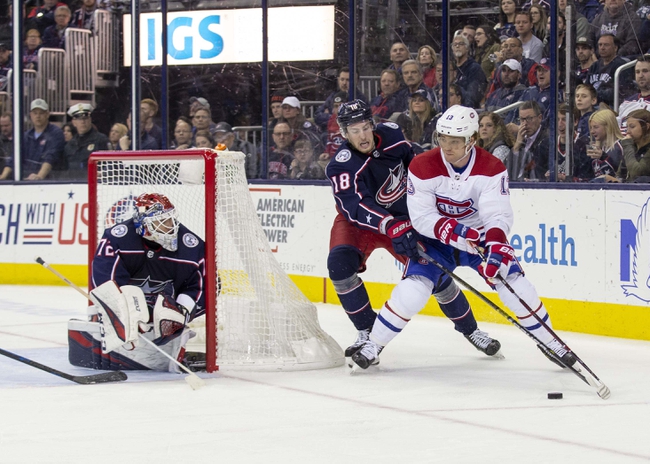 The Columbus Blue Jackets and the Montreal Canadiens meet in NHL action from the Bell Centre on Tuesday night.

The Columbus Blue Jackets will look to bounce back after a 4-2 loss to the Colorado Avalanche in their last outing. Emil Bernstrom opened the scoring less than five minutes into the game before Colorado tied the game with just uner five minutes to go in the opening frame. Zach Werenski helped Columbus re-take the lead in the last minute of the 1st period, before Colorado tied the game and took a 3-2 lead in a span of 5:19 in the 2nd period. The Blue Jackets would be unable to find a goal in the 3rd period while Colorado added a 4th goal for insurance to seal the deal and send Columbus home empty-handed. Joonas Korpisalo ended up with the loss, falling to 6-7-1 after giving up all 4 goals on 36 shots faced in the losing effort.

The Montreal Canadiens will look to build on a 3-2 win over Los Angeles for their 5th win in their last 7 games. Montreal jumped all over the Kings, scoring a pair of goals :15 apart just after the midway point of the opening period from Shea Weber and Nate Thompson before Weber made it 3-0 with his 2nd power play goal of the game. Los Angeles pulled a goal back in the 2nd and another in the 3rd but the Habs would hold on for the win. Carey Price got the win to improve to 8-4-2 on the year after stopping 31 of 33 shots faced in the victory.

The plus money is tempting with Columbus, but the Blue Jackets have struggled in the underdog role and haven’t had much luck in Montreal, winning just 2 of their last 7 trips to the Bell Centre. Montreal’s had their ups and downs, but the Habs are a solid team at home and should be able to get the job done here. I don’t love the price on the money line, so I’ll side with Montreal in regulation to get a more favorable price.