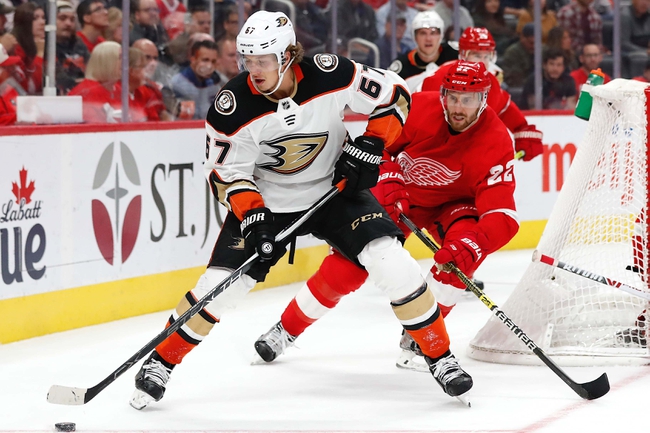 The Detroit Red Wings and the Anaheim Ducks meet in NHL action from the Honda Center on Tuesday night.

The Detroit Red Wings will look to build on back-to-back wins after a 3-2 win over the Vegas Golden Knights in their last outing. Vegas took a lead with three and a half minutes to go before Andreas Athanasiou tied the game at one for Detroit on the power play with just :45 to go in the period. Vegas went ahead 2-1 with the lone goal of the 2nd period but Madison Bowey tied the game at two for Detroit with just over nine minutes to go and the game appeared headed to go to OT before Anthony Mantha scored with :31 to go to give Detroit the win. Jonathan Bernier ended up with the win, improving to 4-4-1 on the year after stopping 17 of 19 shots faced in the winning effort.

The Anaheim Ducks could use a win to snap a three game losing streak after a 6-2 defeat at the hands of Edmonton last time out. Edmonton opened the scoring just 1:28 into the game before Rickard Rakell evened up the game at one just 1:56 later. Edmonton would re-take the lead just after the midway point of the opening period and pushed 4-1 ahead by the end of the 2nd period. Max Jones cut the deficit back to 4-2, but that’s as close as Anaheim got as the Oilers added two more goals in the 3rd to secure the win. John Gibson got the loss, falling to 6-8-0 after allowing all 6 goals on 31 shots faced in the losing effort.

Anaheim has been a solid team at home in the early part of the year, but the Ducks are a streaky team and are streaking in the wrong direction right now. Detroit’s won back-to-back games and even though both were at home, the Red Wings beat a pair of quality teams in Boston and Vegas and I think the Red Wings can take down Anaheim here.