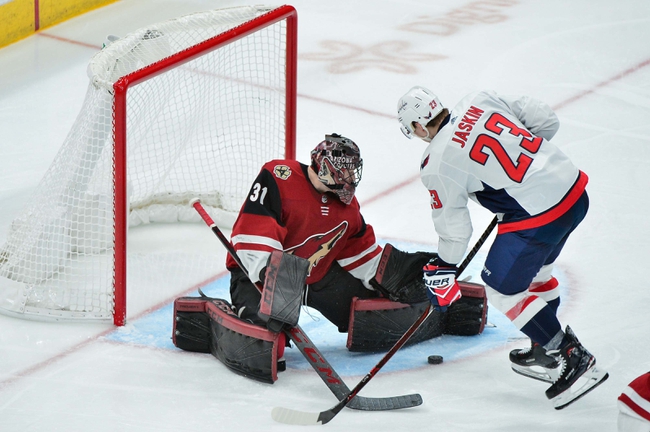 The Arizona Coyotes and the Washington Capitals meet in NHL action from the Capital One Arena on Monday night.

The Arizona Coyotes will be out to snap a three game losing skid after a 4-3 loss to the Minnesota Wild in their last outing. Michael Grabner and Jakob Chychrun scored 3:50 apart to stake the Coyotes an early 2-0 lead after 20 minutes of play before Minnesota got on the board on the power play early in the 2nd. Vinnie Hinostroza restored the two goal lead about five minutes later, but Minnesota would tie the game by the end of the 2nd, leaving us deadlocked at three heading to the final period. Minnesota pushed ahead 4-3 just under five minutes into the 3rd period and despite Arizona outshooting the Wild 14-5 in the 3rd period, the Coyotes wouldn’t be able to find an equalizer. Darcy Kuemper took the loss, falling to 7-5-0 on the year giving up all 4 goals on 24 shots faced in the losing effort.

The Washington Capitals will look to add to their current 6-game winning streak after a 5-2 win over the Vegas Golden Knights in their last outing. Evgeny Kuznetsov opened the scoring for the Caps just :58 into the game before Tom Wilson doubled the lead less than five minutes later. Vegas pulled one back before the midway point of the opening frame to make it a 2-1 game heading into the 2nd. Jonas Stegenthaler restored the two goal lead later in the 2nd before Vegas pulled another one back less than two minutes later. Nicklas Backstrom made it 4-2 just after the midway point of the 3rd period on the power play and sealed the win with an empty net goal with :46 to go in the game. Braden Holtby got the win to improve to 8-1-3 on the year after stopping 30 of 32 shots faced in the winning effort.

Arizona and plus money like this is tempting considering how profitable the Coyotes have been early on, but the Coyotes have slipped up over the last couple of games and haven’t been as strong defensively as they have been for most of the season so far. Washington is just on fire and is on another one of those lengthy winning stretches that the Caps usually go on a couple times a year, and I just don’t want to step in front of the Capitals right now. I’ll side with Washington and to get a more favorable price, I’ll side with the Caps in regulation and I’ll also put a little bit on the puck line as well.