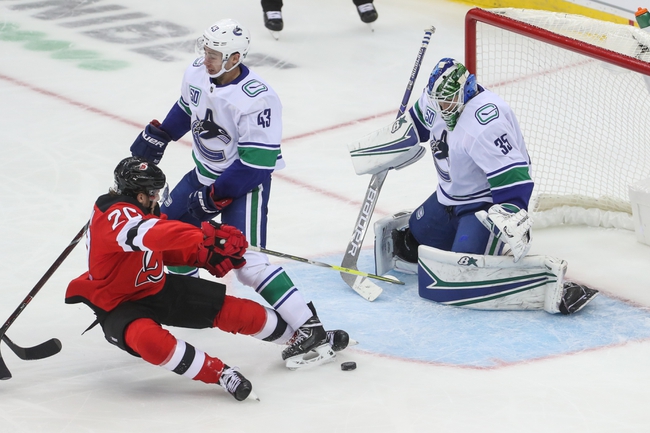 Where to watch: SN-Pacific, MSG+ Stream live sports and exclusive originals on ESPN+. Sign up now!

The New Jersey Devils and the Vancouver Canucks meet in NHL action from the Rogers Arena on Sunday afternoon.

The New Jersey Devils will look to rebound from back-to-back losses after a 4-0 loss to the Edmonton Oilers last time out. The game was deadlocked at zero through the opening 20 minutes before the Oilers broke things open in the 2nd, scoring three unanswered goals, the 2nd and 3rd goals coming 1:06 apart. Edmonton added a 4th goal for good measure early on in the 3rd, sending the Devils home without a point and without a goal for their hard work as none of New Jersey’s 29 shots found the back of the net. P.K. Subban ended up leading the Devils with 7 shots on goal while Nikita Gusev had 4 shots on target. Cory Schneider took the loss after allowing 4 goals on 32 shots faced to fall to 0-4-1 on the year in the losing effort.

The Vancouver Canucks will be out to snap a three game losing streak following a 4-1 loss to the Winnipeg Jets in their last outing. The game was scoreless through 20 minutes here as well, before J.T. Miller gave Van-city the lead just under seven minutes into the second period. Winnipeg forged ahead 2-1 by the end of the 2nd period and scored a pair of goals in the 3rd period to take an insurmountable 4-1 lead. Thatcher Demko ended up with the loss, falling to 4-2-0 on the year after stopping 31 of 34 shots faced in the losing effort.

Normally I’m not trying to lay this kind of juice with a team that’s lost three straight like Vancouver has, but backing New Jersey isn’t an option as the Devils have regressed back to a team that’s struggling to keep the puck out of the net and struggling to find goals of their own as we saw in the loss to Edmonton. Vancouver is a far better team than they are on the road, averaging 4.8 goals per game at home this season while New Jersey’s been outscored 27-11 in seven road games this season. I think this one gets ugly again for the Devils, so I’ll side with Vancouver to get the job done and I’ll also put some on the Canucks in regulation and on the puck line for some added value.