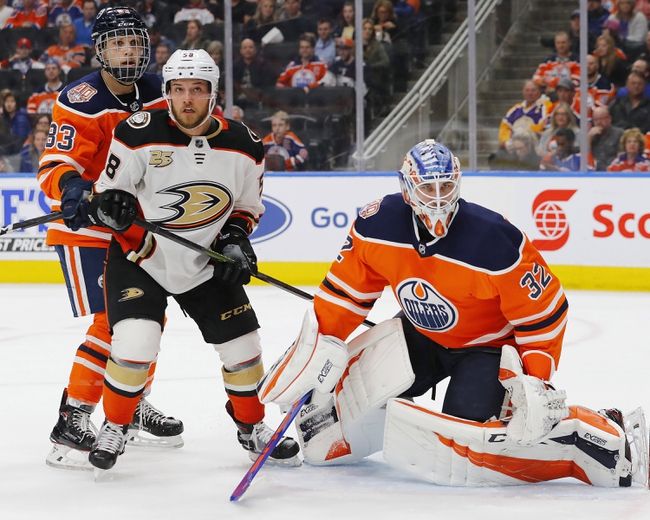 The Edmonton Oilers and the Anaheim Ducks meet in a Pacific division clash in NHL action from the Honda Center on Sunday night.

The Edmonton Oilers will look to build on a 4-0 win over the New Jersey Devils in their last outing. The game was scoreless through 20 minutes of play before Leon Draisaitl broke the deadlock 1:55 into the 2nd period. Gaetan Haas and James Neal would score 1:06 apart to push Edmonton ahead 3-0 and Alex Chiasson chipped in a 4th just over six minutes into the 3rd period on the power play for good measure. Mikko Koskinen got the win to improve to 6-1-1 on the year after stopping all 29 shots faced in the winning effort for his 1st shutout of the season.

The Anaheim Ducks come into this game looking to rebound from back-to-back losses following a 4-2 defeat at the hands of Minnesota in their last outing. The game was scoreless through the 1st period in this game as well before Rickard Rakell and Jacob Larsson scored :25 apart to stake the Ducks a quick 2-0 lead. That’s where everything came crashing down though, as Kevin Fiala cut the deficit in half before the midway point of the 2nd period. Mats Zuccarello tied the game 1:28 into the 3rd and Eric Staal gave the Wild the least just over three minutes later. Zach Parise added an empty net goal to secure the win and send the Ducks back empty-handed. John Gibson ended up with the loss, falling to 6-7-0 on the year after allowing 3 goals on 25 shots faced in the losing effort.

I get Anaheim being favored at home, mainly because the Ducks have had a lot of success against the Oilers over the years. However, I just have a hard time with the Ducks right now after dropping back-to-back home games against a pair of subpar teams in Minnesota and Chicago, when the Ducks are normally a tough out at the Honda Center. Edmonton’s slowed down a bit from what we saw in the early going, but the Oilers are still talented and one of the better teams in the west and I think getting them at this price is worth a look, so I’ll side with Edmonton on the road here.