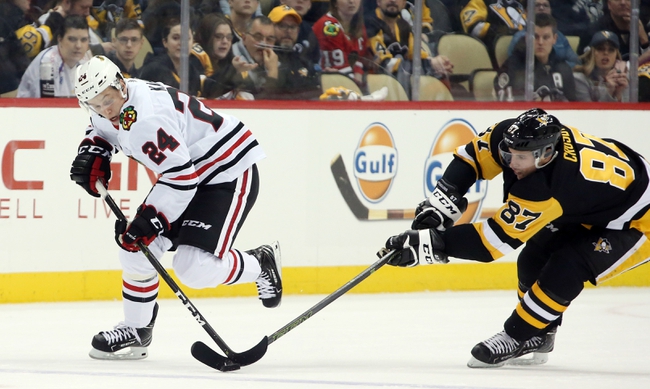 The Chicago Blackhawks and the Pittsburgh Penguins meet in NHL action from the PPG Paints Arena on Saturday.

The Chicago Blackhawks will look to build on a 5-2 victory over the Vancouver Canucks in their last outing. Alex DeBrincat and Andrew Shaw staked the Blackhawks a 2-0 lead after 20 minutes of play before Vancouver cut the deficit in half with the lone goal of the 2nd period, giving us a 2-1 game at the end of 40 minutes of play. The 2-1 score held for most of the 3rd before Patrick Kane added an insurance goal with just over five minutes to play. David Kampf added an empty net goal with just over two minutes to go, but Vancouver would respond just 1:06 later. Brandon Saad would close the book on any attempt at a comeback with one more empty ent goal for good measure with just :06 to go in the game. Corey Crawford ended up with the victory after stopping 36 of 38 shots faced in the winning effort, improving to 2-4-1 on the year as a result.

The Pittsburgh Penguins will look to build on a 4-3 win over the New York Islanders in their last outing, snapping New York’s 10-game winning streak as a result. New York took the lead just :19 into the game and rode that lead into the 2nd where a pair of 2nd period goals gave the Isles a 3-0 lead heading into the final 20 minutes. Jared McCann got the Pens on the board 1:38 in the 3rd before Bryan Rust and Evgeni Malkin scored 2:32 apart to tie the game at three for Pittsburgh. The rest of the 3rd couldn’t produce a winner, so it was off to overtime where Rust scored his 2nd of the game 3:25 into overtime to complete the comeback for the Penguins. Matt Murray got the win to improve to 8-3-1 on the year after stopping 20 of 23 shots faced in the victory.

I wouldn’t be worried about a look-ahead spot for the Pens here as Pittsburgh doesn’t play again until Tuesday. However, I am concerned about a letdown after such an emotional win over the Islanders, with Pittsburgh rallying from 3-0 down in the 3rd to tie the game and win in OT. The trends also suggest that there couldn’t be a worse opponent for the Pens in that scenario, as the underdog has won 4 of the last 5 meetings and Chicago’s had Pittsburgh’s number in recent years. I think if there was a time to take a stab with Chicago on the road, it would be here, so I’ll take a shot on the Blackhawks to steal one here.