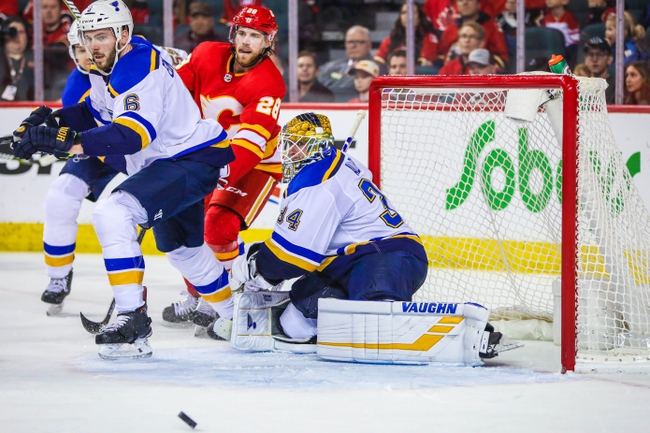 The St. Louis Blues and the Calgary Flames meet in NHL action from the Scotiabank Saddledome on Saturday.

The St. Louis Blues will look to add to their current six game winning streak after a 5-2 win over Edmonton in their last outing. Edmonton opened the scoring just 2:46 into the game before Jaden Schwartz tied the game at one on the power play just 3:16 later. St. Louis pushed ahead 3-1 in the 2nd thanks to goals from Alex Pietrangelo and Robert Thomas. The Oilers pulled one back just after the midway point of the 3rd period but that’s as close as the Oilers got, as Tyler Bozak and Ivan Barbashev each scored an empty-net goal short-handed 26 seconds apart to push the Blues ahead 5-2. Jake Allen got the win to improve to 3-1-0 on the year after stopping 32 of 34 shots faced in the winning effort.

The Calgary Flames will be looking to build on back-to-back wins after a 5-2 win over New Jersey in their last outing. New Jersey opened the scoring with just over four minutes to go in the opening period before Derek Ryan tied the game at one for Calgary just over three minutes into the 2nd period. Jersey re-took the lead just 2:19 later before Sean Monahan tied the game for the Flames just before the halfway point of the 2nd. Mikael Backlund gave Calgary the lead and Noah Hanifin pushed the Flames a pair of goals ahead just before the end of the 2nd. Johnny Gaudreau scored just after the midway point of the 3rd to give Calgary a 5-2 lead that the Devils wouldn’t be able to cut into the rest of the way. David Rittich got the win to improve to 9-4-2 on the year after stopping 21 of 23 shots faced in the winning effort.

I get that Calgary has been a solid team at home, going 6-1-1 at home this year with back-to-back wins over New Jersey and Arizona. However, we’re getting plus money with a St. Louis team that’s won six games in a row, looking like the team that won the cup last season with wins over a couple of solid home teams in Vancouver and Edmonton. I just think there’s a lot of value to be had with the Blues here, so I’ll take St. Louis to add to their winning streak here.