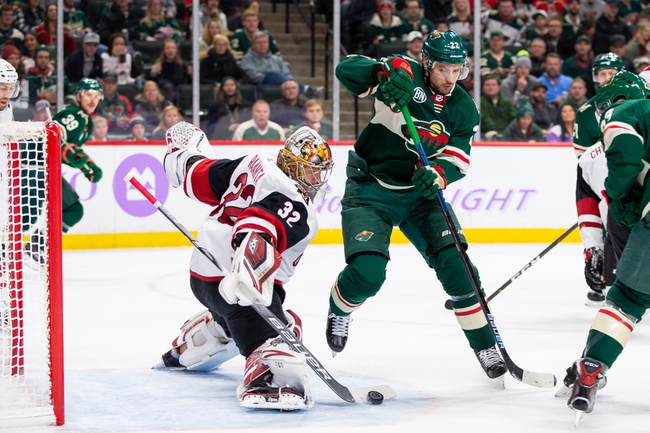 The Minnesota Wild and the Arizona Coyotes meet in NHL action from the Gila River Arena on Saturday night.

The Minnesota Wild will look to rebound after a 6-5 loss to the San Jose Sharks in their last outing. San Jose opened a lead less than a minute into the game and doubled their cushion just over six minutes later. The Sharks would score a 3rd and 4th first period goal just 1:52 apart to take a 4-0 lead into the 2nd period. The 4-0 score held through most of the 2nd before Luke Kunin got the wild on the board. San Jose responded 1:13 later on the power play before Eric Staal pulled the Wild back just :55 after that. The Sharks responded yet again with less than a minute to go in the 2nd, making it 6-2 heading to the 3rd. Brad Hunt and Ryan Donato scored 1:14 apart to cut it to 6-4 and Jason Zucker made it interesting with over four minutes to go. That was as close as the Wild got though, as San Jose would hold up late to secure the win and send the Wild back empty-handed. Devan Dubnyk ended up with the loss, falling to 2-7-1 after allowing a pair of goals on 19 shots in relief of Alex Stalock in the 1st.

The Arizona Coyotes will look to bounce back after back-to-back losses, following a 3-2 defeat at the hands of Columbus in their last outing. Columbus opened the scoring just :14 into the game before Carl Soderberg got the Coyotes on the board just after the midway point of the opening period. Jakon Chychrun gave Arizona the lead just after the midway point of the 2nd period before Columbus tied the game at two late in the 2nd. Columbus took the lead for good halfway through the 3rd with Arizona being unable to find the back of the net the rest of the way. Darcy Kuemper took the loss, falling to 7-4-0 after allowing all 3 goals on 33 shots faced in the losing effort.

The plus money with Minnesota is tempting as the Wild have won 7 of their last 10 trips to Arizona. However, the difference between the two sides who have had issues over the last couple of games, is that Arizona has been the much more consistent team and the Coyotes have played the better hockey, while Minnesota continues to have issues on the road, where it be finding goals in low scoring games, or keeping the puck out of the net when the offense actually comes alive. I’ll lay the juice with Arizona in this one as they’re just an easier team to trust at home compared to Minnesota on the road.