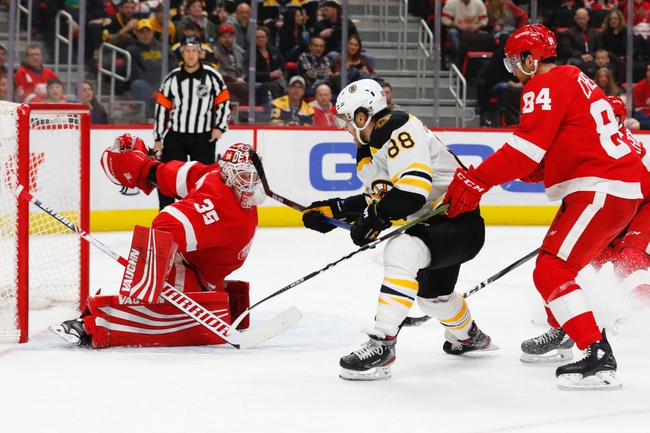 The Boston Bruins and the Detroit Red Wings meet in an Atlantic division tilt from Little Caesars Arena on Friday night.

The Boston Bruins will look to bounce back after having their winning streak snapped with a 5-4 loss to Montreal in their last outing. Montreal opened the scoring just 1:13 in the game but David Pastrnak would tie the game at one on the power play with just over five minutes to go in the opening frame. The tie would last less than two minutes before Montreal re-took the lead and made it 3-1 just :31 later. Connor Clifton pulled the score back to 3-2 and Anders Bjork tied the game at 3-3, but once again, the tie was short-lived as Montreal took another lead just :42 later. Sean Kuraly tied the game at four just over three minutes into the 3rd and Boston thought they had the lead when Charlie Coyle scored but the goal was overturned after a video review. Montreal would turn the tide and re-take the lead just before the midway point of the 3rd to take a 5-4 lead that they wouldn’t relinquish down the stretch. Tuukka Rask took the loss, his first regulation loss of the year, falling to 7-1-1 after allowing all 5 goals on 31 shots in the losing effort.

The Detroit Red Wings will be out to snap a 4 game losing streak after a 5-1 beatdown loss at the hands of the New York Rangers in their last outing. The game was scoreless through 20 minutes of play before the Rangers jumped out to a 3-0 lead in a span of 4:20 early on in the 2nd. Valtteri Filppula made it 3-1 just :52 later and that score would remain heading to the 3rd before the Rangers added two more goals in the 3rd to take yet another loss and extend their second lengthy losing streak in this early season. Jimmy Howard ended up with the loss after allowing 4 goals on 30 shots faced in the losing effort.

The heavy plus money with Detroit is tempting as a home dog as it just takes one bounce to cash the underdog Red Wings. However, the Red Wings have lost 12 of their last 13 games and already have two losing streaks with more games than they’ve won all season long while Boston is playing some of the best hockey in the league. You also have to imagine that the Bruins are a bit ticked off after having their winning streak snapped in controversial fashion against Montreal last time out, and I think they take out some frustration in a big way so I’ll side with the Bruins on the puck line on the road here.