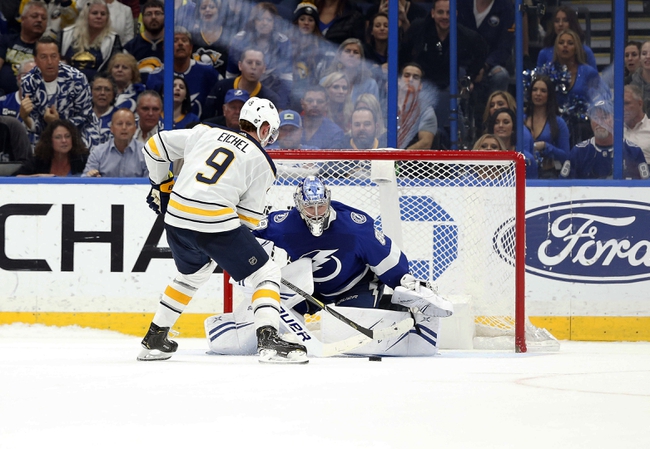 Where to Watch: SN1, NBCS Stream live sports and exclusive originals on ESPN+. Sign up now!

The Tampa Bay Lightning and the Buffalo Sabres meet in an Atlantic division tilt in NHL action from the Ericsson Globe on Friday.

The Tampa Bay Lightning will look to bounce back after being taken down by the Islanders in their last outing by a final score of 5-2. The game was scoreless through the opening 20 minutes before New York took the lead less than 5 minutes into the 2nd period. Yanni Gourde got the Bolts back on level terms just 2:51 later, but the tie didn’t last long as New York went ahead 2-1 less than four minutes later. The 2-1 score held through the 2nd and a good chunk of the 3rd before the Isles pushed ahead 4-1. Tampa Bay pulled one back thanks to Ryan Mcdonagh with less than two minutes to go making it 4-2, but that’s as close as Tampa Bay got as the Islanders added an empty net goal to seal the deal. Andrei Vasilevskiy got the loss, falling to 5-4-0 on the year after allowing 4 goals on 25 shots faced in the losing effort.

The Buffalo Sabres will be out to bounce back and snap a three game losing streak following a 1-0 loss to the same New York Islanders in their last outing. New York opened the scoring just 5:19 into the game and we didn’t know then, but that was all New York needed as none of Buffalo’s 27 shots would find the back of the net. Jack Eichel led the Sabres with 5 shots on goal while Zemgus Girgensons, Colin Miller and Jake McCabe each had 3 shots on target. Carter Hutton ended up with the loss, falling to 6-2-1 on the year after stopping 20 of 21 shots in the losing effort.

This game is hard to call because these games that go overseas tend to take a lot out of teams with the travel and time change. With the two sides playing again in the same venue on Saturday as well, we may be able to get a better idea. With that said, I know the teams are always different, but these global series games tend to be high-scoring games with each of the last 7 games between NHL squads seeing at least 6 goals in a game. I’ll bank on that continuing and I’ll side with the over here as well.