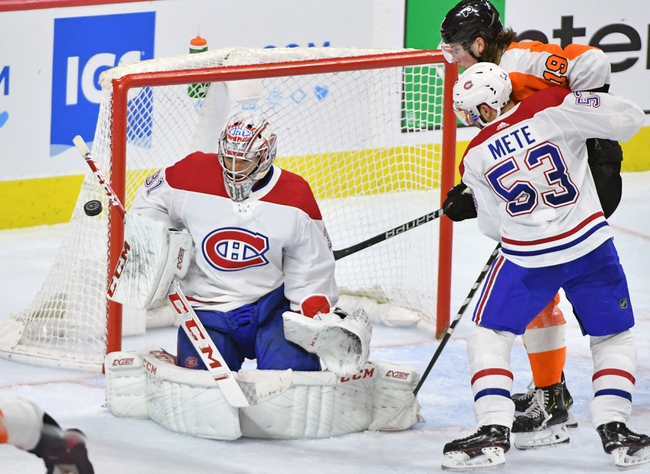 The Montreal Canadiens and the Philadelphia Flyers meet in NHL action from the Wells Fargo Center on Thursday night.

The Montreal Canadiens will look to build on a 5-4 win over the Boston Bruins in their last outing. Victor Mete opened the scoring for the Habs just 1:13 into the game before Boston tied the game on the power play with just over five minutes to go in the opening period. Tomas Tatar and Paul Byron buried :31 apart to push Montreal ahead 3-1 heading into the 2nd period. Boston would eventually tie the game at three late in the 2nd before Mete scored his 2nd of the game to re-take the lead for Montreal at 4-3 just :42 after Boston tied the game. Boston tied the game at four and went 5-4 ahead, but a coaches challenge saw Boston’s goal ruled out due to offside, and that was huge because Ben Chiarot gave Montreal a 5-4 lead just before the midway point of the 3rd period, a lead that Montreal would ride to the finish line to halt Boston’s winning streak. Carey Price got the win to improve to 7-4-1 on the year after stopping 21 of 25 shots faced in the winning effort.

The Philadelphia Flyers will be out to build on a 4-1 win over the Carolina Hurricanes in their last outing. Sean Couturier opened the scoring for the Flyers just 3:30 into the game on the power play and Philly would carry that lead into the 2nd before Carolina tied the game at 1-1. Travis Konecny broke the deadlock just 1:12 into the 3rd period before Joel Farabee added a 3rd and Claude Girouz potted an insurance goal with just over two minutes to go, securing the win for the Flyers. Carter Hart got the win to improve to 4-3-1 on the year after stopping 33 of 34 shots faced in the winning effort.

I’ve given the Flyers a lot of flack lately, as I haven’t trusted their goaltending, but the Flyers have stepped up their play lately and have picked up points in 6 of 7 home games this season. Montreal is prime for a letdown after an emotional win over their rival in the Boston Bruins and I just think that going on the road to play a Flyers team that they’ve barely any success against in Philadelphia isn’t a good spot to be in, so I’ll side with the Flyers at home in this one.