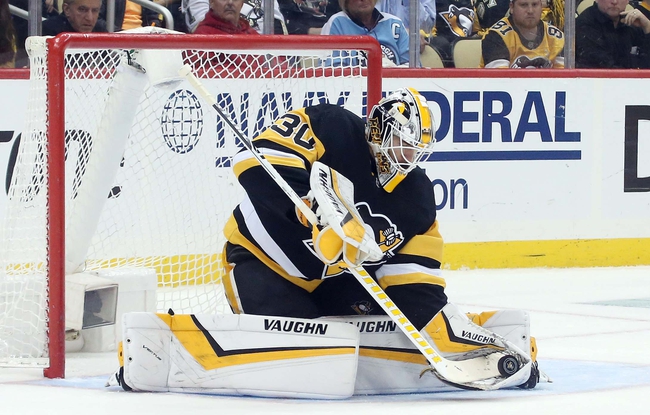 Where to watch: ATTSN-Pitt, MSG+ Stream live sports and exclusive originals on ESPN+. Sign up now!

The Pittsburgh Penguins and the New York Islanders meet in NHL action from the Barclays Center on Thursday night.

The Pittsburgh Penguins will look to bounce back from a pair of consecutive losses after a 6-4 loss to the Boston Bruins in their last outing. Boston pushed ahead 2-0 with a pair of goals in the opening period and went ahead 3-0 early in the 2nd before Dominik Kahun pulled a goal back for Pittsburgh just 1:13 after the B’s made it 3-0. Nick Bjugstad, Bryan Rust and John Marino all scored in the 2nd to give the Pens a 4-3 lead heading into the 3rd period. Boston would fight back though, tying the game just over eight minutes into the 3rd and taking a lead with just under two minutes to play before adding an empty-net insurance goal to seal the deal and send the Pens home empty-handed. Tristan Jarry ended up with the loss in relief after allowing 2 goals on 14 shots faced in the losing effort.

The New York Islanders will look to build on their current winning streak which sits at 10 games after a 4-1 win over Ottawa in their last outing. Ottawa jumped out to a 1-0lead before Cal Clutterbuck tied up the game just :39 later to make it 1-1 for a lead that would hold through the first and most of the 2nd before Cole Bardreau gave New York a 2-1 lead with a penalty shot. Casey Cizikas and Josh Bailey scored :40 apart to stake the Isles a 4-1 lead that the Sens would not cut into the rest of the way. Thomas Greiss got the win to improve to 6-1-0 on the year after stopping 27 of 28 shots faced in the winning effort.

I’ve gone back and forth on this game, as the Isles have been playing superb hockey during this winning streak, giving up two goals or less in all but one game during this winning streak. The problem I’m having though is that Pittsburgh can bang with any team in the NHL with guys like Malkin, Crosby, Guentzel, Murray and others. You also have to think that the Penguins, for being one of the prouder franchises over the last decade, have to want some revenge after being swept and humiliated by the Islanders in the playoffs last year, and one way to get some sweet revenge would be to snap New York’s losing streak. The line has dropped a lot for this game, and I think that may be an omen that things are about to end for the Isles and their winning streak, so I’ll side with Pittsburgh in this one.