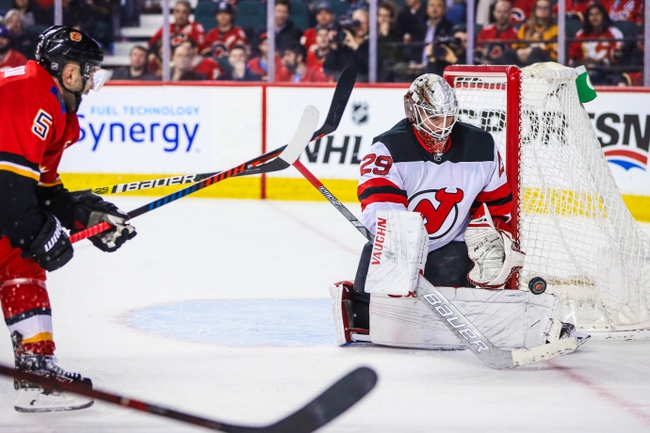 Where to Watch: SN-West, MSG+2 Stream live sports and exclusive originals on ESPN+. Sign up now!

The New Jersey Devils and the Calgary Flames square off in inter-conference NHL action from the Scotiabank Saddledome on Thursday night.

The New Jersey Devils will look to build on back-to-back wins after a 2-1 shootout win over Winnipeg in their last outing. Nico Hischier opened the scoring for the Devils just 4:44 into the opening period and would hold onto that lead through the first and early in the 2nd before Winnipeg tied the game just before the midway mark of the 2nd period. The game held at 1-1 through the 2nd and through all of the 3rd period, so it was off to some free hockey. Overtime solved nothing, so we went to a shootout, where Nikita Gusev and Jesper Boqvist each scored while Winnipeg missed both of their attempts, giving New Jersey the win and the extra point. MacKenzie Blackwood got the win to improve to 4-2-3 on the year after stopping 32 of 33 shots faced in regulation and overtime and both shootout attempts in the winning effort.

The Calgary Flames will look to build on a 4-3 overtime win over the Arizona Coyotes in their last outing. Arizona jumped ahead with the lone goal of the opening period before doubling the lead early in the 2nd. Johnny Gaudreau opened the scoring for the Flames late in the 2nd on the power play. Arizona restored their two goal cushion and almost got the win before Matthew Tkachuk and Mark Giordano scored :49 apart to tie the game and force overtime. The game appeared headed for a shootout before Tkachuk completed the comeback with his 2nd goal of the game with :34 to go in OT. David Rittich got the win to improve to 8-4-2 on the year after stopping 34 of 37 shots faced in the victory.

I can’t believe I’m going to say this given my stance on New Jersey all season long, but I think there’s some value to be had with the Devils here. New Jersey has had the talent it was just the goaltending that was waiting to come along and it’s starting to turn around. The Devils just beat Carolina and Winnipeg on the road, a pair of teams that made the playoffs last season and two teams that are traditionally tough to beat at home. Calgary’s been good at home as well, but their play lately has been up and down and I think the Devils can keep it going for one more night.