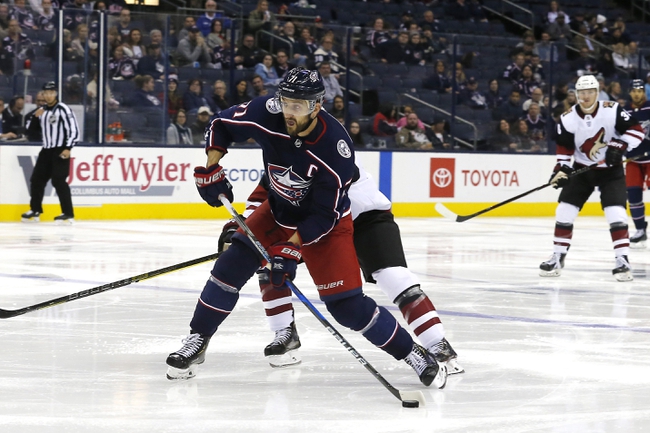 Where to Watch: FS-Arizona+, FS-Ohio Stream live sports and exclusive originals on ESPN+. Sign up now!

The Columbus Blue Jackets and the Arizona Coyotes meet in NHL action from the Gila River Arena on Thursday night.

The Columbus Blue Jackets will be out to snap a five game losing streak after a 2-1 loss to the Vegas Golden Knights at home in their last outing. Vegas opened the scoring in the 1st period late with the lone goal of the period. Columbus tied the game at one early on in the 2nd, but that tie lasted less than two minutes as Vegas re-took the lead short-handed. Columbus outshot Vegas 21-16 over the last two periods, but Columbus would be unable to find the game-tying goal as the Golden Knights held on for the victory. Joonas Korpisalo got the loss, falling to 5-6-1 on the year after allowing both goals on 25 shots faced in the losing effort.

The Arizona Coyotes will look to bounce back after a 4-3 overtime loss to the Calgary Flames in their last outing. Clayton Keller gave Arizona the lead with the lone goal of the opening period before Christian Dvorak doubled that lead just over four minutes into the 2nd. Calgary pulled a goal back late in the 2nd to make things interesting headed to the 3rd. Vinnie Hinostroza restored the two goal cushion just after the midway point of the 3rd period, but the Flames would tie the game with a pair of goals :49 apart late in the 3rd. We went to overtime, and looked destined for a shootout but the Flames had other ideas, scoring with :34 to go in OT to get the win and send Arizona home with just a single point to show for their hard work. Antti Raanta got the loss, falling to 2-1-2 on the year after allowing all 4 goals on 43 shots faced in the losing effort.

The plus money with Columbus is worth a look as this losing streak can’t continue forever, and Columbus has won the last four meetings in Arizona. But Columbus scored one goal or less in three of the five games during this losing streak and performances like that won’t cut it against a Coyotes team that’s improved defensively and has allowed two goals or less in five of their six home games this season. I think that Arizona at home should be too much for Columbus, so I’ll back the Coyotes at home in regulation to get a more favorable price.