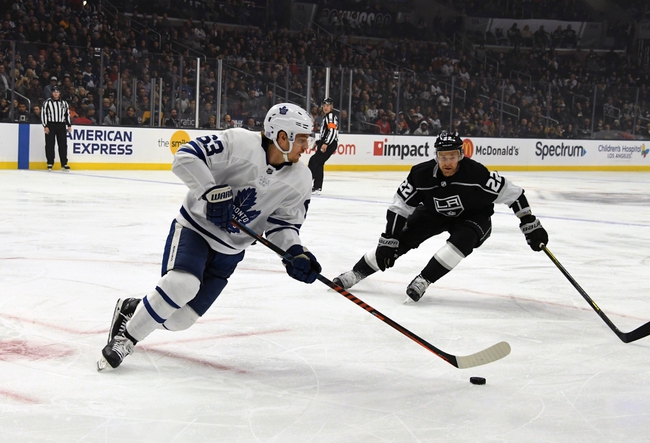 Where to Watch: TSN4, FS-West Stream live sports and exclusive originals on ESPN+. Sign up now!

The Los Angeles Kings and the Toronto Maple Leafs meet in NHL action from Scotiabank Arena on Tuesday night.

The Los Angeles Kings will be looking to build on a 4-3 overtime win over Chicago in their last outing. Kyle Clifford opened the scoring just 2:50 into the game and Matt Roy doubled the lead just 1:39 later, but the advantage would vanish by the end of the opening period as Chicago would tie the game at two. The 2-2 score would hold through the 2nd and the first half of the 3rd before Michael Amadio gave the Kings the lead at 3-2. L.A. couldn’t hold on though, as Chicago scored with 1:39 to go in the game, forcing OT. We looked destined for a shootout before Drew Doughty got the Kings the game winner. Jack Campbell got the win to improve to 3-3-0 after stopping 24 of 27 shots faced in the win.

The Toronto Maple Leafs will look to build on a 4-3 win over Philadelphia in the shootout last time out. Kasperi Kapanen opened the scoring just under six minutes into the game before the Flyers tied the game up at one. Philly pushed ahead 2-1 early in the 2nd before Jason Spezza tallied his first goal as a Leaf to tie things up at two heading to the 3rd. Philly would score L31 into the 3rd, but Mitch Marner would cancel that out 4:32 later to send us to some free hockey. Overtime solved nothing, so it was off to a shootout where none of the first 14 shooters scored before Jason Spezza scored for the Leafs and Travis Konecny scored for the Flyers. Andreas Johnsson got the shootout winner in the 11th round of the shootout to give Toronto the win. Frederik Andersen got the win to improve to 7-2-2 on the year after stopping 37 of 40 shots faced in the win.

The Kings got the win against Chicago, but that win came at home and it doesn’t change the fact that Los Angeles has had issues keeping the puck out of the net more often than not this season. Toronto’s had their moments, but the Leafs need to start playing like the team that has all of that talent and I think Toronto focuses and flexes some muscle in this one. I’ll side with Toronto on the PL to get rid of the heavy juice.