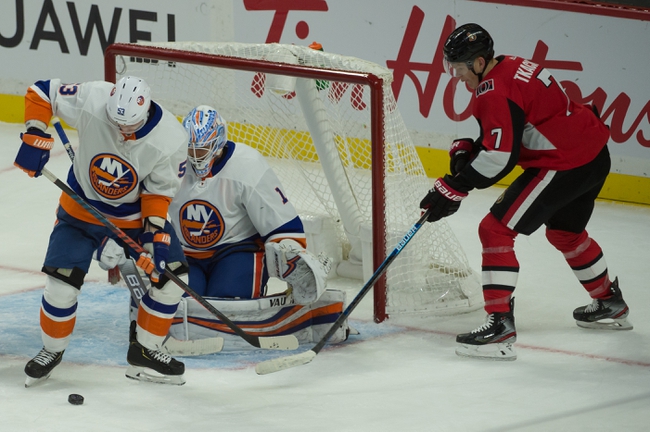 The Ottawa Senators and the New York Islanders meet in NHL action from the Barclays Center on Tuesday night.

The Ottawa Senators will look to build on a 6-2 win over the New York Rangers last time out. New York opened the scoring before J-G Pageau tied the game at one with just over five minutes to go and Tyler Ennis gave Ottawa the lead with 1:29 to go in the 1st on the power play. Ron Hainsey made it 3-1 early in the 2nd and Pageau added his 2nd for a 4-1 lead before Brady Tkachuk made it 5-1 with just over five to go in the 2nd period. Columbus pulled one back to make it 5-2, but that’s as close as they’re get as Vladimir Namestnikov added a goal early on in the 3rd to seal the deal. Anders Nilsson got the win to improve to 2-3-1 on the year after stopping 32 of 34 shots faced in the winning effort.

The New York Islanders will look to build on their nine game winning streak after a 1-0 win over Buffalo in their last outing. Derick Brassard’s marker early on in the first period was all of the scoring that New York would see as the Islanders (Semyon Varlamov specificially), would close the door down the stretch. Varlamov got the win between the pipes to improve to 5-2-0 on the year after stopping all 27 shots faced for his 1st shutout of the season.

The Sens just kicked the crap out of the Rangers on Monday night, but one win isn’t going to move the needle for me when it comes to how bad Ottawa has been and is going to be this season. New York is white hot right now and I just can’t go against New York until the tickets stop paying off. I’ll side with the Islanders here and to get rid of some of the heavy juice, I’ll back the Islanders on the puck line.