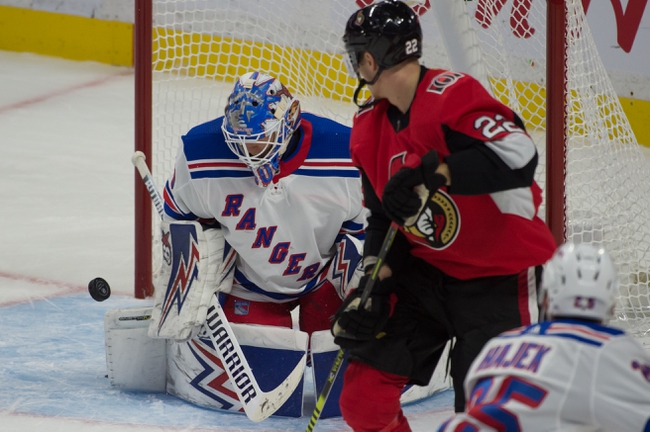 Where to Watch: TSN5, MSG Stream live sports and exclusive originals on ESPN+. Sign up now!

The Ottawa Senators and the New York Rangers meet in NHL action from Madison Square Garden on Monday night.

The Ottawa Senators will look to bounce back after suffering a 5-2 loss to the Boston Bruins in their last outing. Boston opened the scoring on the power play just 1:17 into the game before Anthony Duclair responded for the Sens with just under eight minutes to go in the opening period. Boston would re-take the lead less than two minutes into the 2nd, but Connor Brown would get the Senators back onto level terms just 1:13 later. The tie would hold going into the 3rd where Boston broke the game open with a pair of goals 1:07 apart and added an insurance goal with less than four minutes to go to send Ottawa home empty-handed on the road once again. Craig Anderson ended up with the loss after allowing all 5 goals on 32 shots faced to fall to 2-5-0 on the year.

The New York Rangers will look to build on back-to-back wins after a 2-1 win over the Nashville Predators in their last outing. Filip Chytil opened the scoring for the Rangers with just under four minutes to go in the opening period and Ryan Strome would double that lead just over four minutes into the 2nd period. Nashville would pull one back later on in the 2nd, but the Rangers would close the door from that point on, outshooting the Predators 15-11 in the 3rd while stifling Nashville and holding on for a big road win. Alexandar Georgiev got the win to improve to 3-2-1 on the year after stopping 32 of 33 shots faced in the winning effort.

The plus money with Ottawa would be tempting if the Senators would actually play well enough on the road to give it some value. However, Ottawa has just one point out of a possible 10 on the road in five games this season, and are being outscored 20-10 on the road so far this season. New York isn’t a world beater by any means, but the Rangers have a couple of solid wins under their belts lately and you can definitely argue that New York has a big edge in the goal crease with Georgiev and Lundqvist over Ottawa’s tandem of Anderson and Nilsson. I’ll side with the Rangers here and to cut down some of the juice, I’ll back the Rangers to win in regulation.