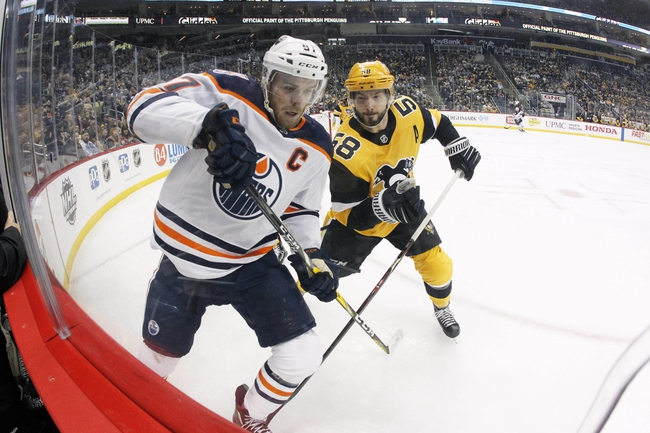 Where to watch: Sportsnet, ATT-Pitt Stream live sports and exclusive originals on ESPN+. Sign up now!

The Edmonton Oilers and the Pittsburgh Penguins meet in NHL action from the PPG Paints Arena on Saturday afternoon.

The Edmonton Oilers will look to build on a 4-1 win over the Columbus Blue Jackets in their last outing. James Neal opened the scoring for the Oilers on the power play just before the midway point of the opening period before Leon Draisaitl doubled the advantage with just under three minutes to go. Jujair Khaira made it 3-0 early in the 2nd period and Draisaitl would make it 4-0 with his 2nd of the game just 3:36 later. Columbus would pull one back just under four minutes later, but that’s as close as the Blue Jackets got as the Oilers slammed the door shut the rest of the way. Mike Smith got the win to improve to 4-3-1 on the year after stopping 23 of 24 shots faced in the winning effort.

The Pittsburgh Penguins will look to build on back-to-back wins after a 7-1 romp over the Philadelphia Flyers in their last outing. Justin Schultz opened the scoring just under six minutes into the game before Jared McCann and Dominik Simon scored :33 apart to push the Pens ahead 3-0 early. Sidney Crosby added a 4th for good measure heading into the 2nd. The 2nd period didn’t see much before Jake Guentzel and Zach Aston-Reese scored :20 apart to push the lead out to 6-0. Philadelphia pulled one back early in the 3rd, but Dominik Kahun scored with just :07 to go to pour salt in the wound and add to Philadelphia’s misery. Matt Murray got the win to improve to 7-3-0 on the year after stopping 29 of 30 shots faced in the winning effort.

I get Pittsburgh being favored here at home, and the potential return of Evgeni Malkin for Pittsburgh doesn’t hurt their cause either. However, the Pens have really only beaten up on bad teams at home, and some of the higher-tier teams have kept the Penguins in check or beat them outright. Edmonton has a lot of talent, especially with their top line with guys like McDavid, Neal and Draisaitl. I just think the goaltending here is about even and the Oilers have the offense and the grit to keep Pittsburgh in line here, so I’d take a shot at Edmonton and plus money in this one.