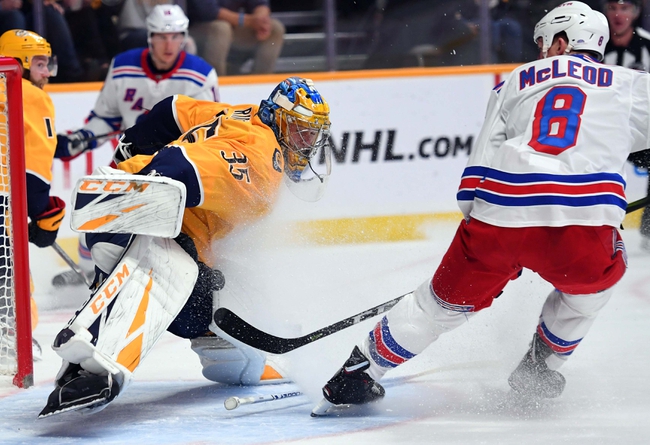 Where to watch: MSG, FS-Tennessee Stream live sports and exclusive originals on ESPN+. Sign up now!

The New York Rangers and the Nashville Predators meet in NHL action from the Bridgestone Arena on Saturday afternoon.

The New York Rangers will look to build on a 4-1 win over the Tampa Bay Lightning in their last outing. Tampa Bay took an early lead with the lone goal of the opening period before Kaapo Kakko tied the game at one with the only goal in the 2nd period. Filip Chytil gave the Rangers a 2-1 lead before Adam Fox added an insurance goal with less than three minutes to go and Ryan Strome iced the win with an empty net goal just 1:50 later. Alexander Georgiev got the win to improve to 2-2-1 on the year after stopping 29 of 30 shots faced in the winning effort.

The Nashville Predators will look to bounce back after a 6-5 overtime loss to Calgary in their last outing. Nick Bonino opened the scoring for the Predators before Austin Watson doubled the lead just after the midway point of the first period. Calgary pulled one back to make it 2-1 heading into the 2nd before Calle Jarnkrok restored the two-goal lead with a short-handed goal early on in the middle frame. Jarnkrok added his 2nd shorty of the period to make it 4-1 heading into the 3rd. Calgary roared back to tie the game at four before Austin Watson gave the Preds the lead at 5-4 with 1:22 to go. Nashville couldn’t hold on though, as Calgary tied the game again with just :39 to go. A shootout looked like it was on the cards before Calgary won the game in OT with less than two seconds to go. Pekka Rinne took the OT loss, falling to 7-0-2 on the year after allowing all 6 goals on 27 shots faced in the losing effort.

The plus money could be worth a look as New York looked solid against Tampa Bay and won two of their last three tripe to the Bridgestone Arena. However, a lot of New York’s recent success has come at home, and the Rangers have notched back-to-back 5-2 losses in their last two road games. You can’t be giving up five goals a game, especially with a high-powered offense like Nashville’s on the other side. The Predators still lead the NHL averaging over four goals per game, and I like Nashville to keep that offense going here for another win. I’m not laying this kind of price though, so a regulation play could hold some value but I’ll go ahead and side with the Predators on the puck line.