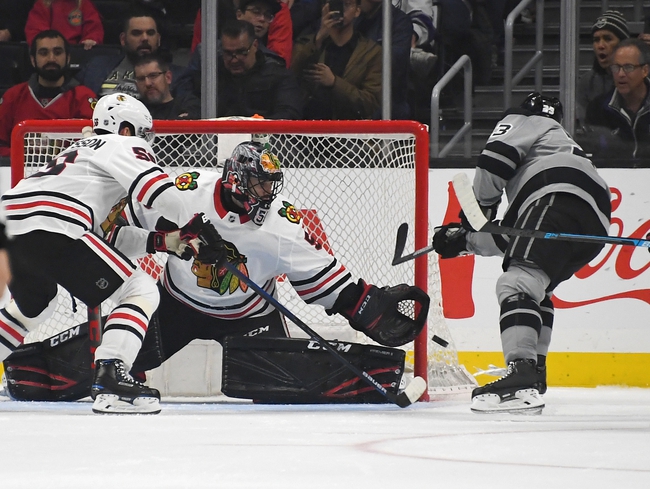 Where to watch: FS-West, NBCS-Chicago Stream live sports and exclusive originals on ESPN+. Sign up now!

The Chicago Blackhawks and the Los Angeles Kings meet in NHL action from the Staples Center on Saturday night.

The Chicago Blackhawks will look to rebound from a 3-0 loss to the Nashville Predators in their last outing. Nick Bonino scored a goal in each period for the Predators while Chicago was unable to breach the Nashville goal in the entire 60 minutes. The Blackhawks were outshot handily 51-20, with Olli Maatta leading the Blackhawks with 4 shots on goal while David Kampf and Duncan Keith each had 3 shots on goal. Robin Lehner took the loss after allowing all 3 goals on 51 shots faced in the losing effort.

The Los Angeles Kings could use a win to snap a four game losing streak after a 5-3 loss to the Vancouver Canucks in their last outing. Jeff Carter opened the scoring for the Kings before Vancouver responded with a pair of power play goals 1:55 apart late in the 1st. Adrian Kempe tied the game at one just after the midway point of the opening frame before Vancouver took the lead again at 3-2 heading into the 3rd. Vancouver pulled ahead 5-2 before Jeff Carter added a consolation goal with 1:11 to go but it was too little too late as the Canucks held on to send L.A. to a 4th straight loss. Jonathan Quick ended up with the loss, falling to 2-6-0 on the year after allowing 5 goals on 49 shots faced in the defeat.

I don’t think I can will myself to put my hard earned money on either of these teams, as both have some serious goaltending issues. Although Chicago’s been shut out in two true road games stateside this season, I’m going to side with the over here. Like I said, I just don’t have faith in the goaltending on either side, as the Blackhawks have given up 7 goals in those two road games while L.A. gave up five goals to Chicago less than a week ago and Jonathan Quick is a shell of the goaltender that we once knew. I think this game can hit 7 or 8 goals, so I’ll side with the over in this contest.