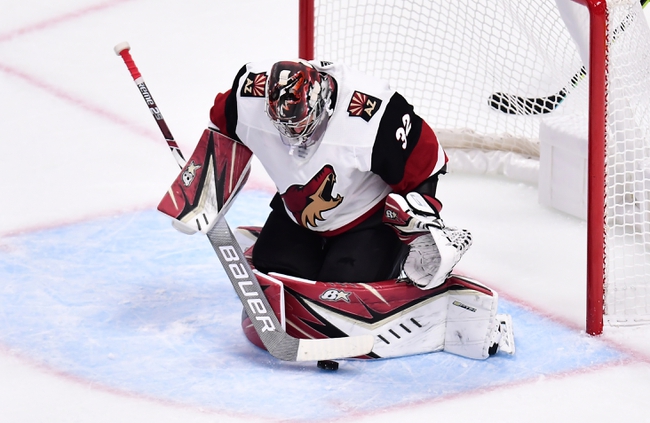 The Colorado Avalanche and the Arizona Coyotes meet in NHL action from the Gila River Arena on Saturday.

The Colorado Avalanche will look to snap a three game losing streak after a 2-1 loss to Dallas in their last outing. Dallas opened the scoring with less than two minutes to go in the opening period before doubling that lead short-handed early on in the 2nd period. Nathan MacKinnon pulled on back on the power play just before the midway point of the 2nd, but that’s as close as the Avs got as Dallas slammed the door shut the rest of the way. Phillipp Grubauer ended up with the loss, falling to 6-2-2 on the year after allowing a pair of goals on 29 shots faced in the defeat.

The Arizona Coyotes will also be looking to rebound after a 4-1 loss to the Montreal Canadiens last time out. Montreal scored just :22 into the game and held that lead going into the 2nd period where the Habs would double that cushion just :24 into the middle frame. Montreal went ahead 3-0 just 1:17 into the 3rd before Jakub Chychrun got the ‘Yotes on the board just 3:30 later. Montreal would restore the three goal cushion just after the midway point of the final period and would carry that lead to the finish line, sending Arizona home empty-handed. Antti Raanta got the loss to fall to 2-1-1 on the year after allowing 4 goals on 36 shots faced in the defeat.

We saw in their last outing just how big the loss of Landeskog and Rantanen can be to Colorado and their success, as the Avs were just stifled at home. Now, the Avalanche have to travel on a back-to-back, against an Arizona team that’s been stout on defense and between the pipes for the better part of the season so far. The Coyotes put up a dud against Montreal, but I expect Arizona to bounce back against a short-handed Colorado team here.